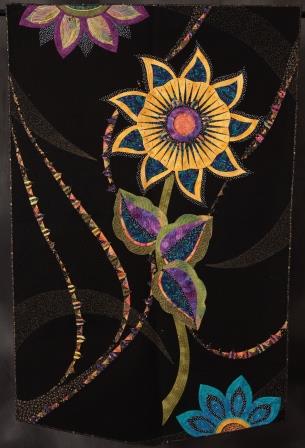 Sharon Schlotzhauer has always loved fabric. She had done occasional garment sewing and fabric-related crafts from her teens into adulthood.

Sharon began quilting in 2000 shortly after “inadvertently’ watching a portion of Eleanor Burns, Quilt-In-A-Day program one Saturday morning. (Truthfully, Sharon was actually waiting for a different program to come on and had tuned in a bit early)  Sharon thought that Eleanor made quilting look so fun and had made such a beautiful block, that her interest was piqued.  After that initial introduction, Sharon started tuning in each Saturday morning and eventually became hooked.  Prior to that chance encounter, she had had no interest in either quilts or quilting! The inspiration for Really ‘Wild’ Flowers!  came from Sharon wanting to do something dimensional and unusual.  Ever since she began making art/wall quilts in 2004, she has worked in dimension and embellishment in some way.  This quilt is the newest in her ‘Wild’ Flowers! series which began in 2008 with a smaller Robert Kaufman challenge quilt.  The three larger, “Really ‘Wild’ Flowers! ‘Seasons’ quilts began in 2009.  All the ‘wild’ flower quilts are different but similar to each other and the flowers have evolved in different shapes and forms.  The required commonality is the dimensional open-centered flowers, which to Sharon’s knowledge is uniquely her own.  The idea for each quilt comes with a thought, a sketch, and what she imagines that she can do to make the next quilt a little more interesting. [caption id="attachment_4088" align="aligncenter" width="406"] 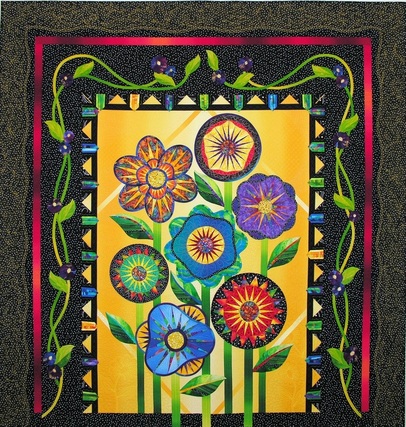 Really ‘Wild’ Flowers! Second Season – 62″ x 65″
​went missing in November 2011 in Houston, Texas.
There is a reward for its safe return​[/caption] Sharon spent a little under 400 hours in 2015 working on this quilt.  (Her second “Season” quilt took 700 hours!!)  Every competition quilt Sharon makes is a learning process as she attempts to create a more interesting or more innovative element with each consecutive one. What did Sharon think when she found out she won Outstanding Innovative Quilt at Road 2016? “I was absolutely stunned for a few moments – and then filled with incredible excitement!!  I had to read the email twice to be sure I didn’t misunderstand it!  I never take any award of any size, at any show, for granted.  I’m always grateful, and it’s a blessing for me when my work is given recognition by judges or viewers alike.” What does Sharon plan to do next with her quilting? She wants to continue to” follow my interest and my heart.” Sharon plans to keep on making show and competition quilts along with benefit and personal/gift quilts in between.  There are two more pieces to her ‘Wild’ Flowers! series that are currently drafted and waiting to be made.  Making miniatures is also an increasing interest for Sharon – usually hand-appliqued landscapes.  Sharon says that she loves detail and enjoys working in small scale. To learn more about Sharon and her work, please visit her website.    ]]>

This entry was posted on Thursday, June 9th, 2016 at 9:49 pm and is filed under Winning Quilts. You can follow any responses to this entry through the RSS 2.0 feed. You can leave a response, or trackback from your own site.