Beginner’s Luck– Noun. The initial good fortune or success commonly supposed to come to a person who has recently taken up a new pursuit.

She won 3rd Place-Fantasy for her quilt, The Witch. 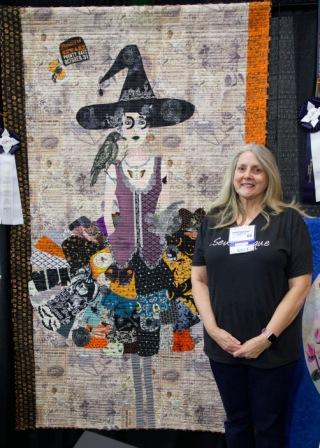 The Henderson, Nevada resident had only been quilting “seriously” for the past four years thanks to classes she has enrolled in at her local quilt shop, Quiltique. One class she took, The Dress, a Laura Heine pattern.

When Thalia saw the pattern, she immediately thought that it would make a perfect witch. So, she contacted Laura and asked if she would mind if she changed up The Dress to become The Witch. Laura’s reply was, “It would be a compliment.” So off Thalia went. The fabric used was the key to the Thalia’s inspiration. Starting on the collage part first, she would put different fabrics up on her design wall and just let it take on a life of its own. The face of The Witch was based on Tula Pink’s fabric line, Nightshade.

Thalia had been to Road 5 times in the past and felt she could “never make a quilt good enough to be shown there.”  After she finished The Witch, Thalia began receiving lots of good comments on Instagram, Facebook and in the quilt shop. So many, that Thalia decided that maybe this quilt was the one “worthy” to enter in Road’s Quilt Contest. When she received the letter saying that The Witch was accepted for judging at Road 2018, Thalia “cried.” A couple months later, Thalia was in a casino at the slot machines when she got the email that she had won—and she cried again!! Going to Road 2018 and seeing her quilt on display was “the icing on the cake.” Where does this beginner’s luck recipient go from here? “I hope I’m not a one-hit wonder,” said Thalia. “I will be taking more quilt classes at Quiltique and want to try machine embroidery. I think I have an original design in me.” Congratulations Thalia Patricio for your first win on your first try at entering a quilt in a quilt show. We were glad you chose Road to California.]]>

This entry was posted on Tuesday, April 17th, 2018 at 6:09 pm and is filed under Road to California 2018, Winning Quilts. You can follow any responses to this entry through the RSS 2.0 feed. You can leave a response, or trackback from your own site.