before Road 2018, we sponsored a 10-day Daily Giveaway. Each day, from January 3 through January 12, entries were collected from comments on our Facebook and Instagram accounts.  One comment was randomly selected per day as the winner. The Grand Prize winner was chosen on the last day: Erica from Chino, California. She said she entered the giveaway every day on Instagram. When she found out she had won, she was both “shocked” and “excited” as she jumped for joy. Erica won 4 tickets to the show; 4 passes to Jenny Doan’s Trunk Show on Friday night; and for Saturday, lunch for 4 plus registration in 2 classes: Blooming Dresdens taught by Lee Chappell Monroe and Goodbye UFO’s—Hello New Projects taught by Pat Yamin. 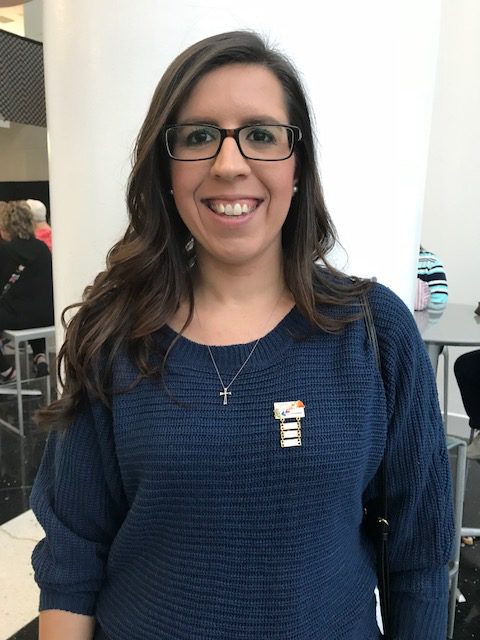 A young mom with two children ages 11 and 2, Erica has been to Road 4 times. She says it’s her “escape.” “I love coming here and seeing everything. I get so inspired.”  Erica has been quilting since 2009 and says she often hears, “You’re too young to be quilting!!” Her best friend’s grandmother taught her how to quilt. Recently, Erica has gotten her daughter started in quilting because she wants to pass on her legacy of quilting. During the show, we gave away several sewing machines for our Daily Drawings. Guests entered their names into a big gold drum located at the North Registration Desk. In order to receive their prize, winners had to be present at the show. If they weren’t in the immediate vicinity of the drawing, they had 15 minutes to claim their prize. Thursday’s winner was Debbie Johnson from Montclair, California. She won a Brother Disney Innovis Sewing and Embroidery Machine donated by Moore’s Sewing. Debbie has attended Road over 10 times and was in a class (her third of the week!) when she received the phone call that she had won. Debbie said winning the machine was “the perfect ending to my day.” 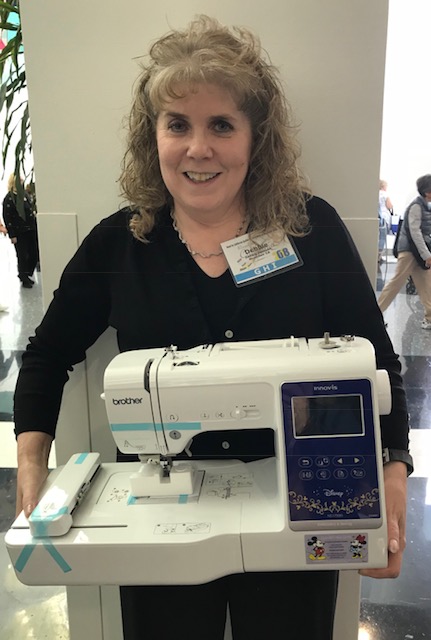 Something new for 2018 was that there were two drawings held on Friday and Saturday. At 11:30 AM on Friday, a Bernina “Simply Red” 215 donated by Mel’s Sewing and Fabric Center, was won by Sylvia Corbin of San Diego, California. She and three friends had attended Party Time the night before and was on a lunch break from Jenny Doan’s class when she heard her name called. 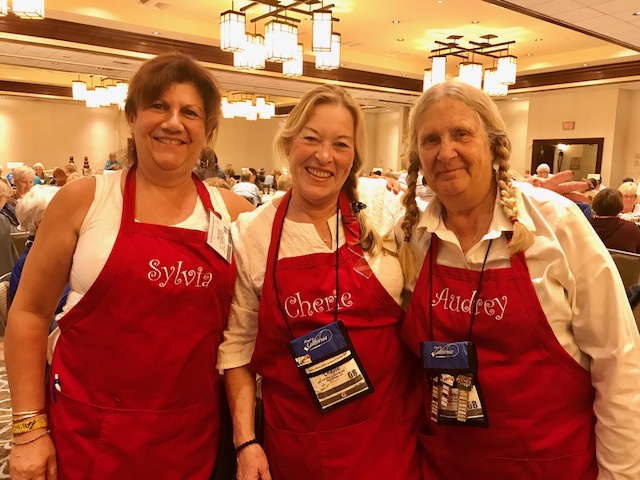 You could hear Sylvia screaming down the main hallway as she ran to collect her prize. Sylvia loves Bernina sewing machines (this prize made it her 4th Bernina) and loves the quilting community. 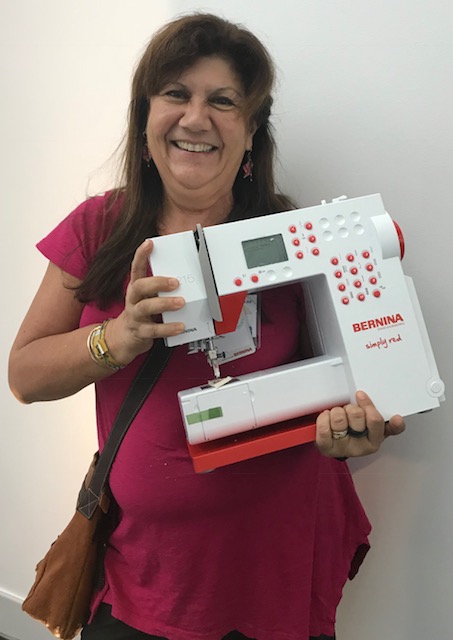 On Friday afternoon, Myles Eakes of Phelan, California was getting his lunch at nearby Victoria Gardens when he received the phone call that he had won. “Shocked” that he had won, Myles raced back to the Ontario Convention Center, without breaking any traffic laws, but did have to double-park in order to make the 15-minute deadline!!! 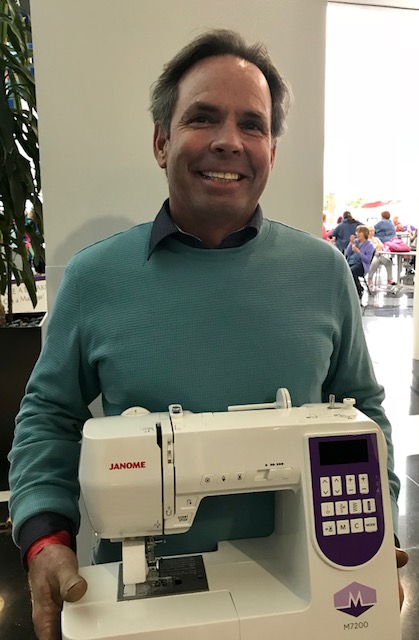 Myles is a hand-sewer and is currently designing a quilt featuring golf flags. He came to the show with his wife and mother- both quilters. At first, they did not believe he had won; after all, he was supposed to be getting his lunch so they took their time meeting up with him. Boy were they surprised when they saw him standing with his Janome M7200 donated by Moore’s Sewing!! 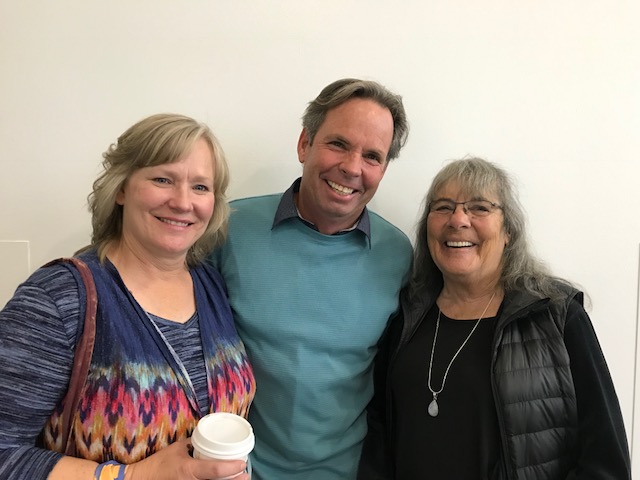 On Saturday morning, it took three tries before Denine Moriarity of Valley Center, California, was able to claim her prize, a Baby Lock Katherine, donated by Moore’s Sewing. When she heard that the second person drawn wasn’t present to win, Denine said to herself, “The next one will be me!!”  She was “amazed” to win and thought the machine was just “awesome.” 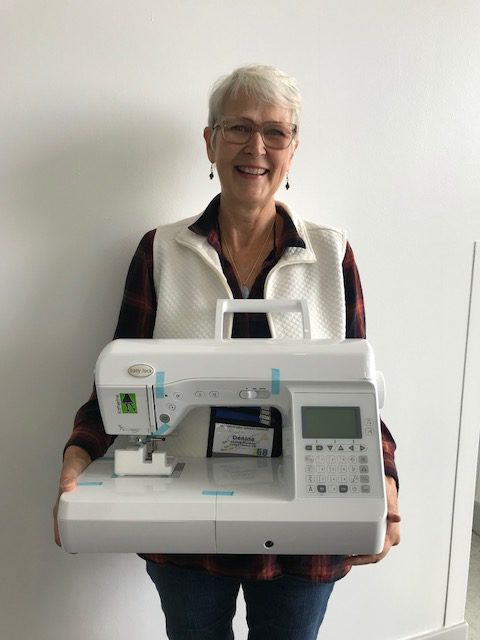 A quilter for 15 years, Denine came to Road 2018 with her sisters. She took two classes and loved the inspiration. 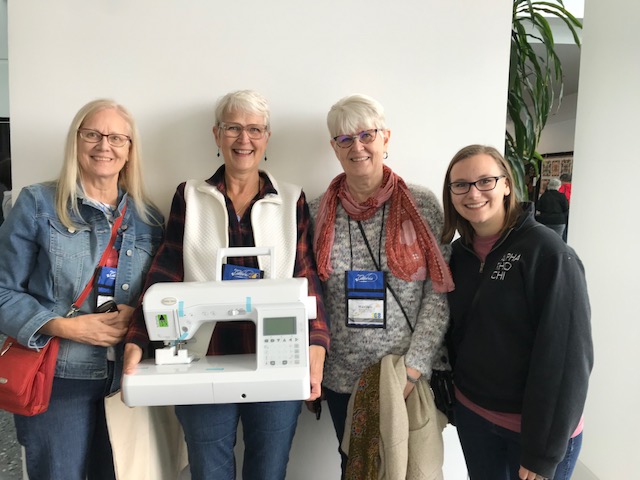 Irene Towler of Hollister, California, won the Saturday afternoon drawing, a Viking Tribute 145 donated by OC Sewing and Vacuum. Road 2018 was Irene’s first time at the show. She commented on the quilts on display saying that they were “the most beautiful quilts I have ever seen. Irene has been quilting “forever” and is a founding member of The Pinnacle Quilters in San Benito County. 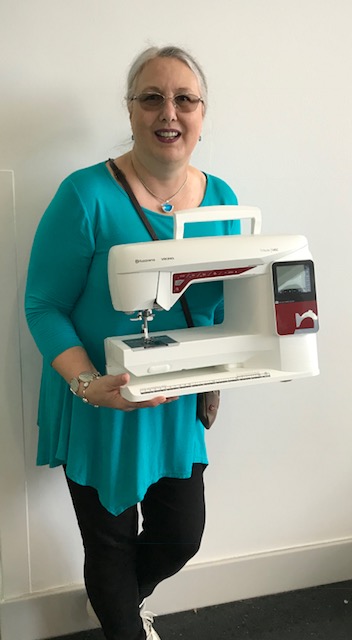 The final drawing was held Sunday afternoon where Georgann Bradenburg was the “happy” winner of a Martelli Premier Work Station. 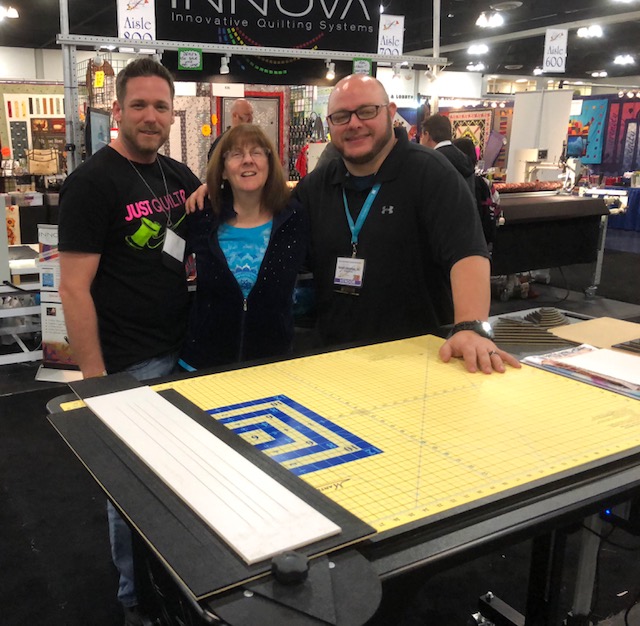