Friends And Quilting Are A Great Combination 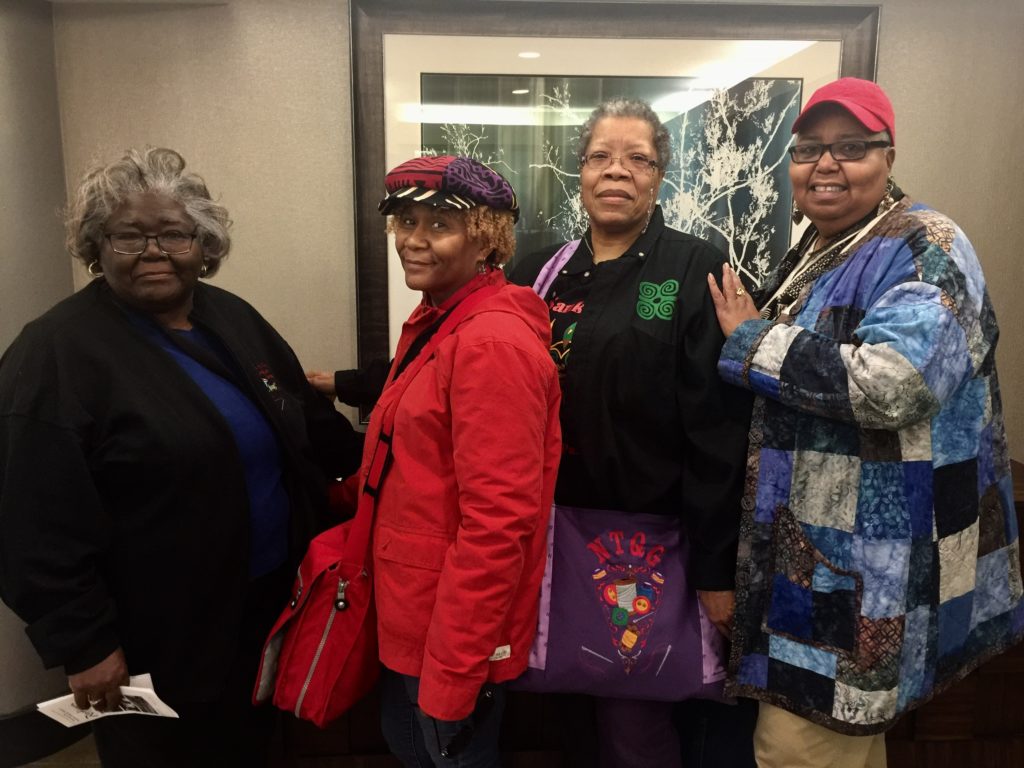 These four friends live in the Chicago area and belong to the Needles and Threads Quilt Guild. They were easy to spot with their matching quilt guild accessories. 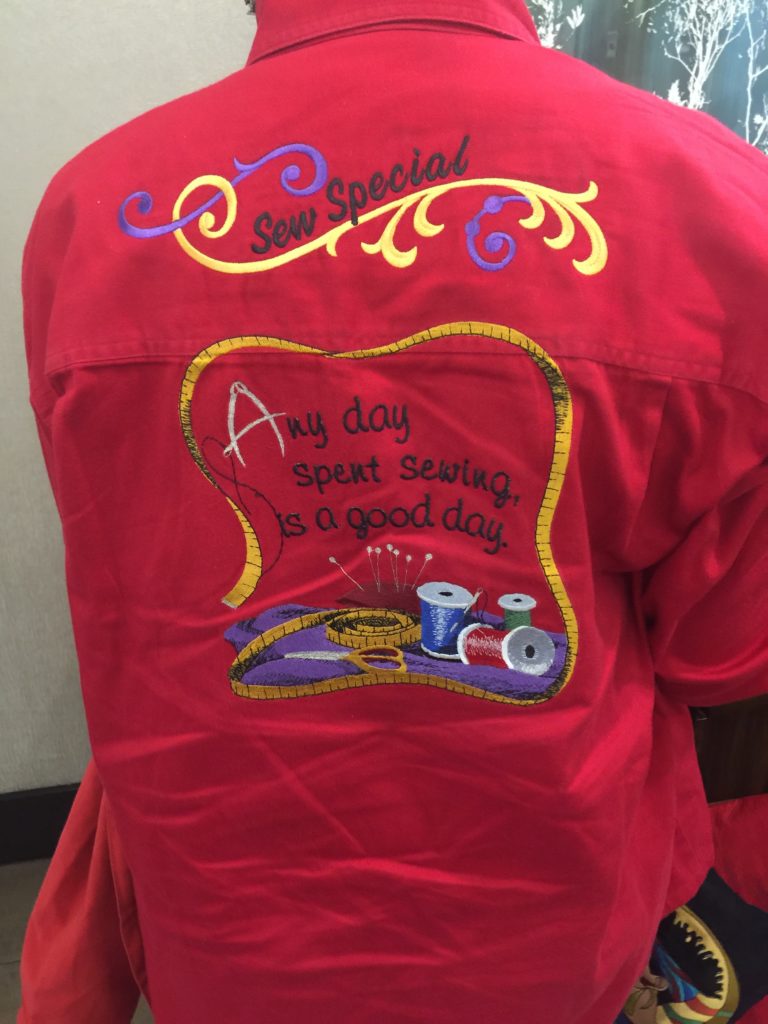 Together, they have been quilting over 30 years. They were thrilled to leave the Midwest weather and “hang together” to see what was new in the quilting world and all the “gorgeous” quilts. Karen and Dee are locals; they live up the street from the Ontario Convention Center in Rancho Cucamonga. Karen has been attending Road for the past 10 years. This was Dee’s first time at Road. She had heard about how fun the show was from her local quilt shop, The Quilt Loft, and from Karen. Karen said she had warned Dee beforehand by telling her to be “prepared to be overwhelmed.” They enjoyed seeing the quilts and the variety of vendors. Dee can’t wait to take classes next year. [caption id="attachment_4921" align="aligncenter" width="490"] 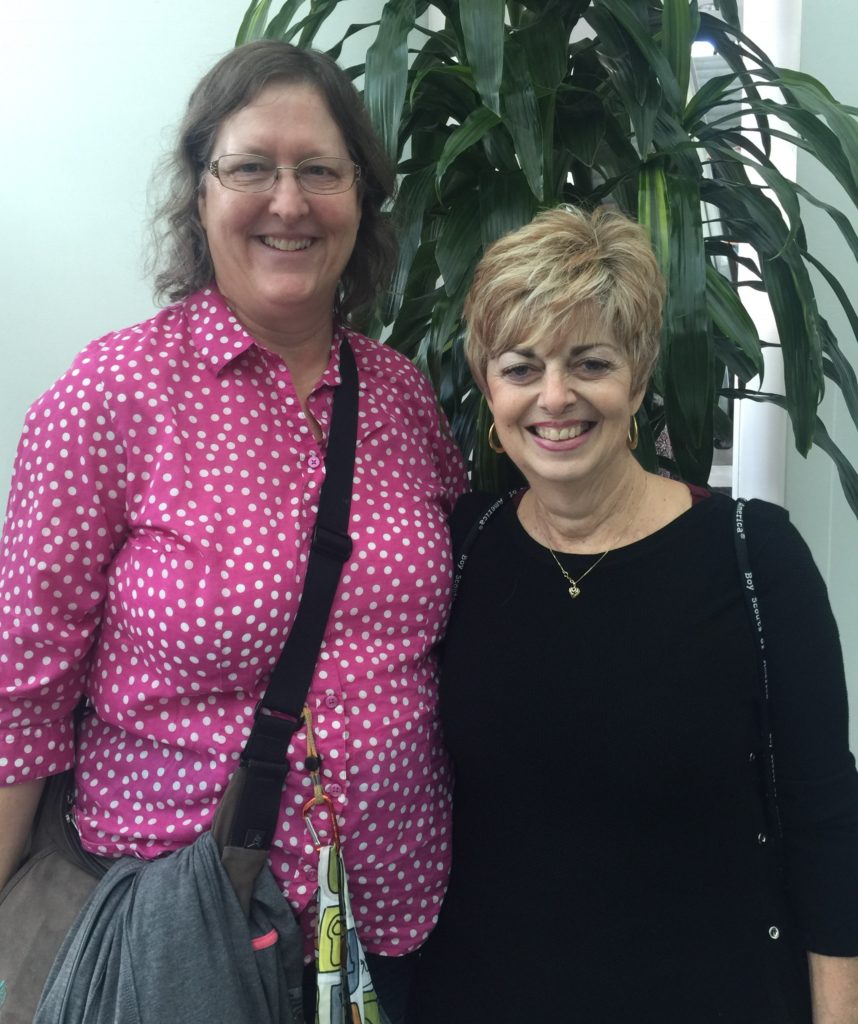 L to R: Karen and Dee[/caption] Marquita is from Simi Valley, California and Kathy is from Delaware. They have been friends for over 60 years, growing up across the street from each other in Sepulveda, California. For the past 15 years, coming to Road to California has been their annual get together. It’s how they stay in touch. They come to the show for 5 days, bringing their sewing machines and stay up sewing each night until after midnight. They also bring lots of food— and wine!! Both have been quilting since 1989. Marquita prefers traditional quilting and Kathy loves machine embroidery. [caption id="attachment_4924" align="aligncenter" width="483"] 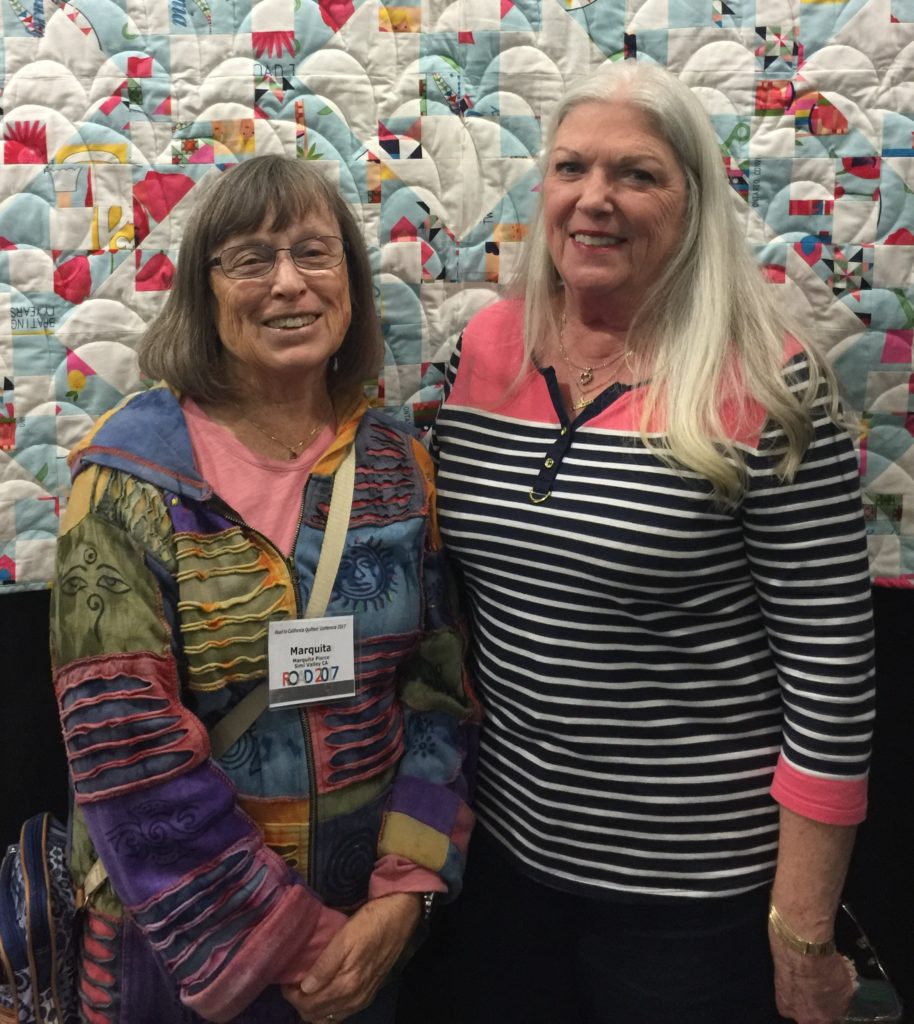 L to R: Marquita and Kathy[/caption] These friends worked together at Kaiser Permanente for 30 years. At that time, neither Delcina or Maria were quilters. When they retired, they were looking for something to de-stress so they took a furniture upholstery class. That teacher suggested they go to a quilting class and they have been hooked ever since. The class is held every Saturday in Baldwin Park, California.  Road 2017 was their 5th time to come to the show. When they first started coming, they focused on looking at all the quilts, walking the whole show one row at a time. Now they’ve added also taking classes.  “There is lots of inspiration here,” said Delcina. [caption id="attachment_4923" align="aligncenter" width="502"] 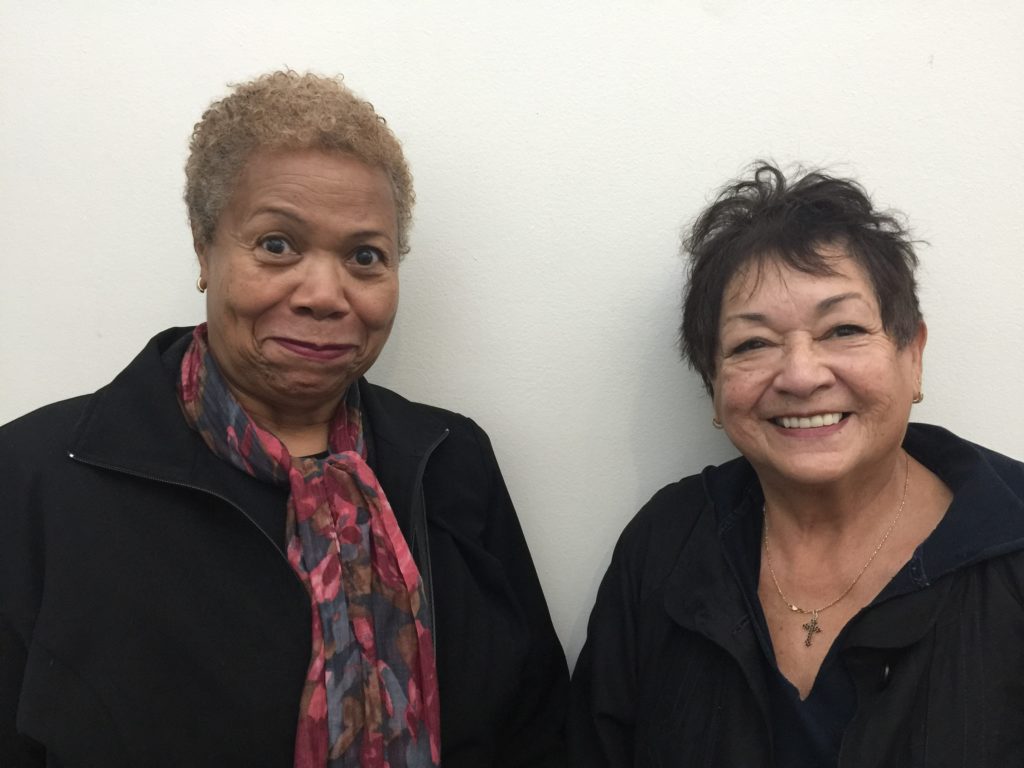 Road Is A Friendly Place

What could be better than sharing your love of quilting with friends that you love?

That’s exactly what these friends did at Road to California 2016: 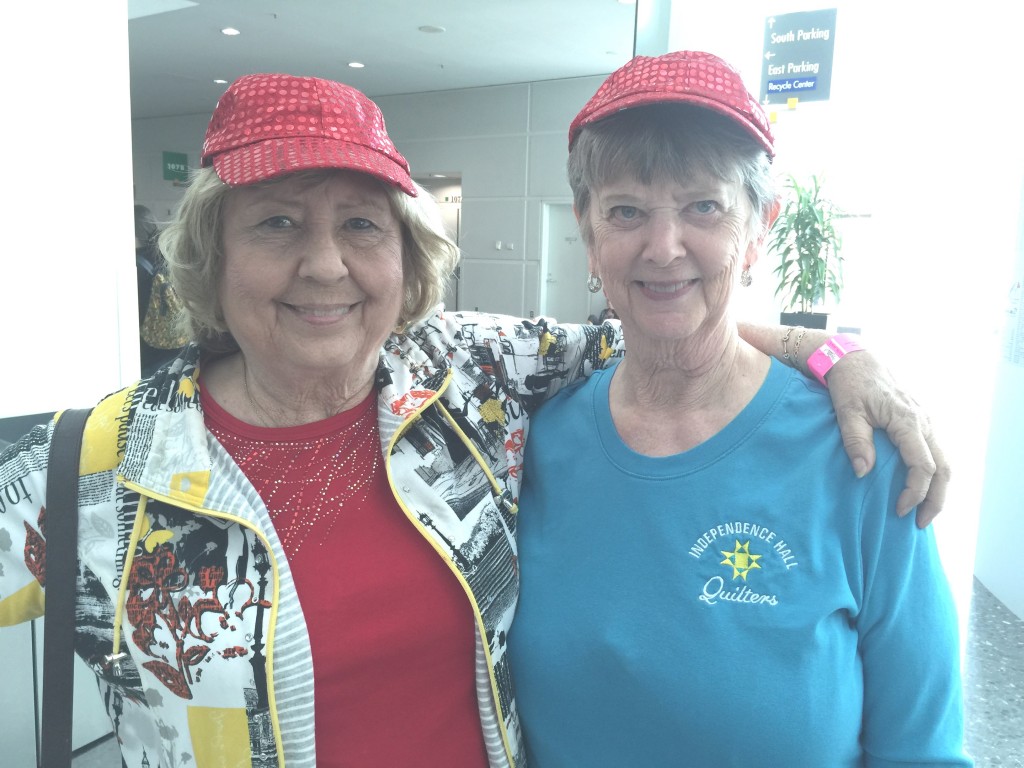 Rosalee and Jodi say that they “have grown up together.” They met at church in La Habra, California when their children were babies. Jodi has been quilting for 21 years and when she retired, she moved to Arnold, California, in the Sierras. Roasalee started quilting 12 years ago after she retired from Bank of America. They always wear hats to quilt shows so that they can find each other. This was their 10th visit to Road to California. 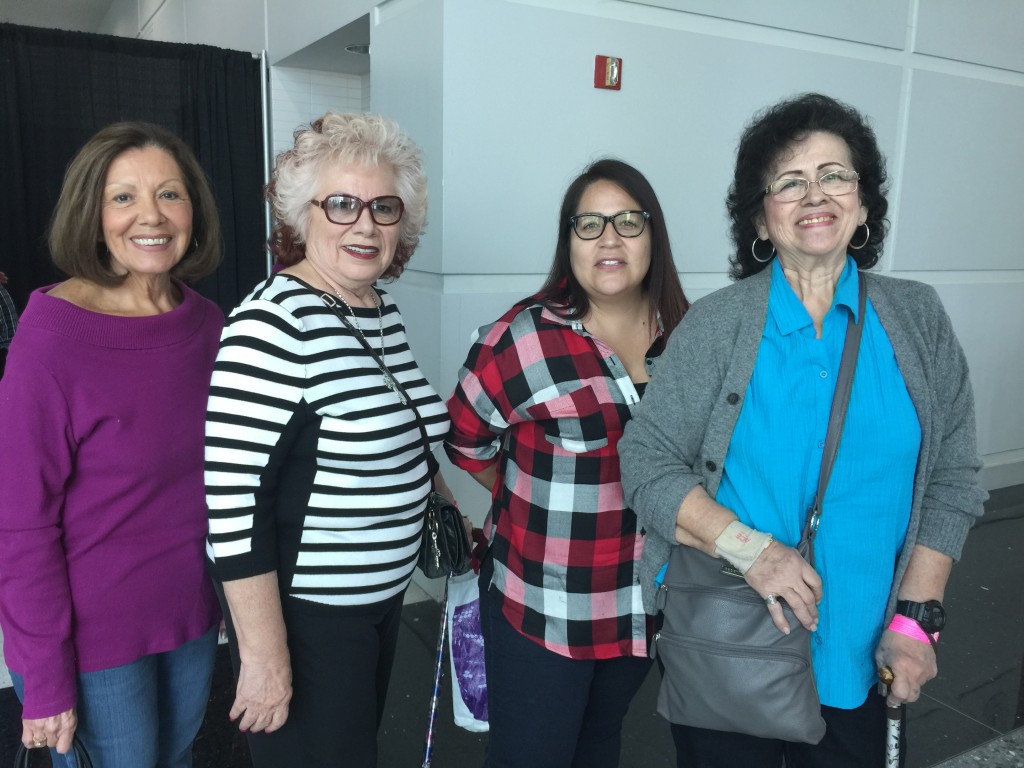 Sometimes it only takes one mutual friend who quilts to get a group of other quilters together to come to Road. These ladies all credit Petra for bringing them together. Petra and Sandra are both 72 years old and have known each other since they were 16. Patricia is another long time friend and Nancy works for Petra.  They all live in different cities in the eastern part of San Bernardino County. Road 2016 was Nancy’s first time at the show. “I have seen Petra’s quilts and was curious with what quilting was about.” The other three have been to Road over 10 times. Says Petra, “There is always something different to see. It just keeps getting better year after year.” 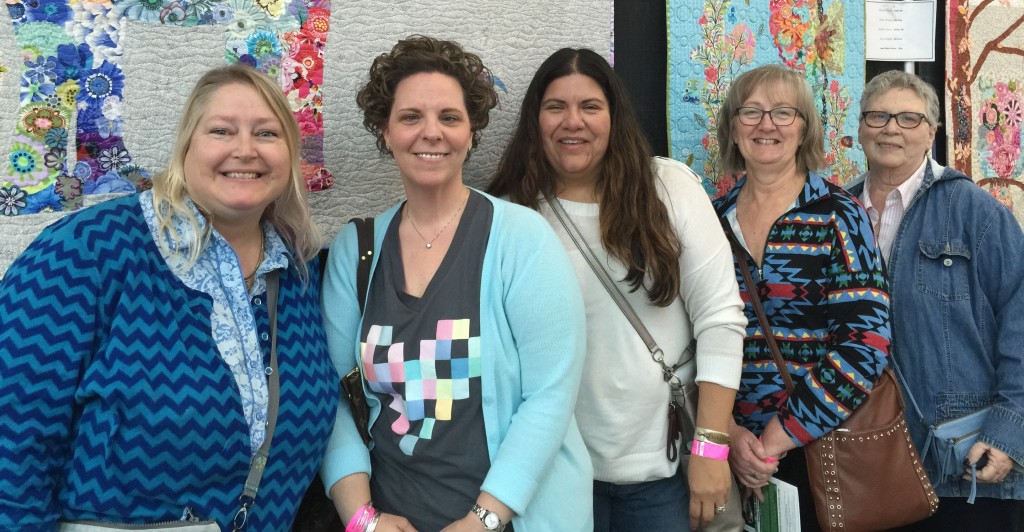 Meet (l – r) Michele Rank, Jennifer Adams, Becky Brekke, Jody Baca, and Kathy Pruett. These friends live all around Southern California and meet up at Road each year. “We wouldn’t miss it,” they exclaimed. What do they like most about Road to California? Says Michele, “The variety of vendors.” Jennifer added, “The inspiration.” And for Becky, “The quilts.” They all take quilting classes through ABC School District’s Adult Education. They aren’t committed to any particular quilting style. “Modern or traditional — we do whatever we think looks best.” 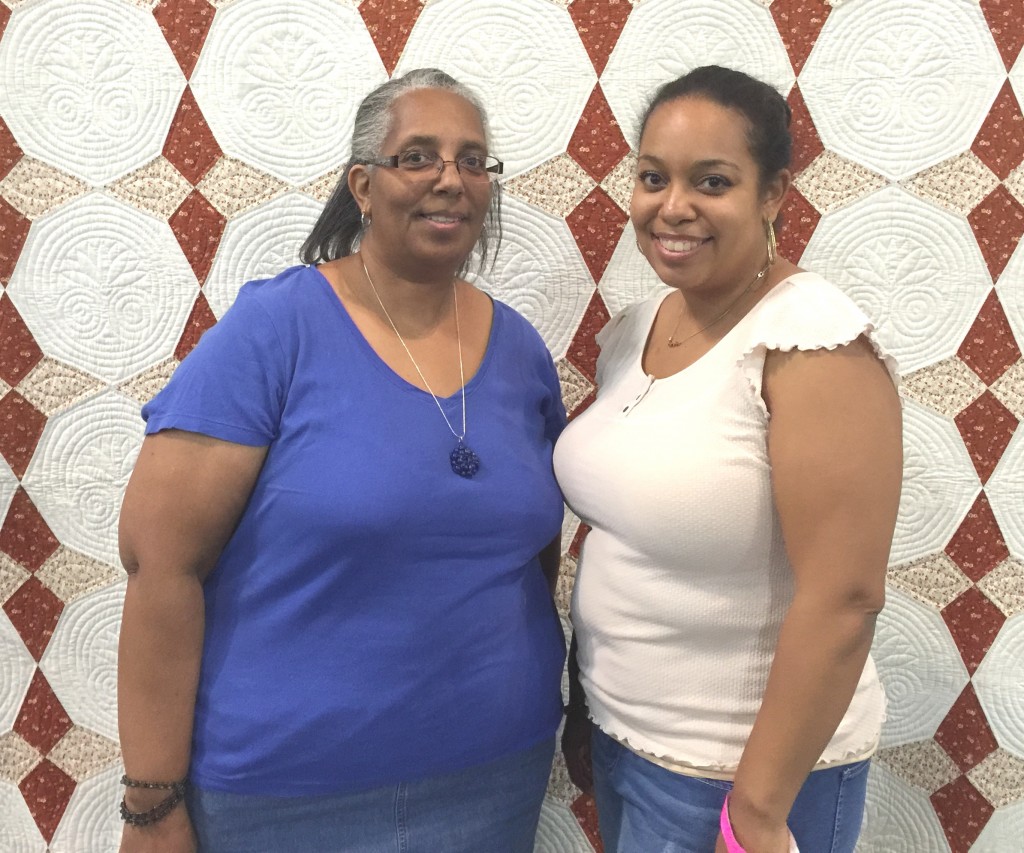 Vivian Graham and Monica Tucker both live in Moreno Valley, California. They treat themselves to come to Road as part of their birthday celebrations which falls in January during and right after Road each year. Monica likes coming to Road for the inspiration. This year, she was looking for glitter applique sheets and art quilt ideas.  Vivian learned to sew clothing in the 8th grade and has been quilting for 34 years. She said, “I live for Road. It is four days of heaven.”

Will you and your friend be coming to Road’s “little bit of heaven” in 2017?

Friends, Neighbors, and a Road Reunion

In 1967, the Reese family along with several other families, moved on to a cul-de-sac in Upland, California. One of the neighbors was another Carolyn—Carolyn Wilt. The two Carolyns, along with the other women on the block, all became good friends. Carolyn Wilt moved away from the area before she knew anything of Carolyn Reese’s sewing and quilt shop.

Prior to moving to Upland, Carolyn Wilt had grown up in northern California. She had attended junior high and high school in Palo Alto with her two best friends, Karen and Jeannette. After high school, the three went their separate ways. They remained “Christmas card” friends but eventually, Jeannette and Karen (who stayed in the bay area) lost touch with Carolyn.

Fast forward to September, 2012. Jeannette, who is a quilter, had received literature about Road to California. She read that Carolyn Reese and the show’s offices were in Upland, California. That got Jeannette thinking about her long lost friend, Carolyn Wilt, who she knew once lived in Upland. Jeannette was eager to reconnect with Carolyn Wilt so she wrote Carolyn Reese asking if she might happen to know the whereabouts of one Carolyn Wilt. (Keep in mind that Upland has a population of around 76,000 people so Jeannette’s request was a total shot in the dark). Much to Jeannette’s and Carolyn Reese’s surprise, Carolyn did indeed once know Carolyn Wilt but had lost track of her as well. She was able to provide Jeannette with a couple names and contact numbers for others who had lived on the cul-de-sac in 1967. Sure enough, one of those families knew that Carolyn Wilt now lived in Oceanside, California and was able to put Jeannette in contact with her. After 44 years, junior and senior high best buddies Carolyn Wilt, Jeannette Walker and Karen Fuller were back in touch. They chose Road to California as their reunion destination activity. They all met up at Carolyn’s home in Oceanside and then drove together to Road. They wanted to personally thank Carolyn Reese for having a hand in bringing them back together. Everyone had a great time catching up on years gone by. It was especially fun for Carolyn Reese to be able to show off her family to Carolyn Wilt who had last seen Carolyn’s sons when they were just young boys.

What a story. What a reunion!! 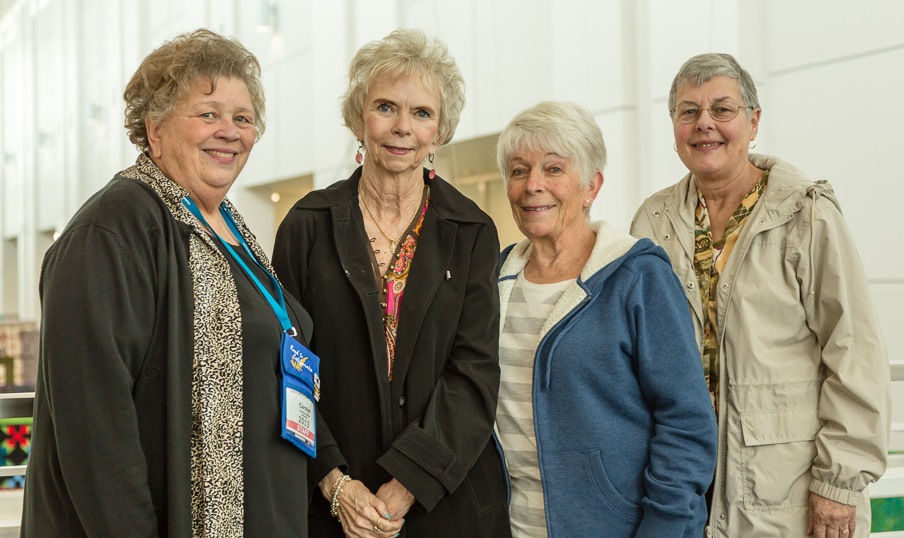