Beginning in the late 1960s our family spent many of our vacations boat camping on Lake Powell in Southern Utah.  We would pile the four kids, all the food and camping gear in a boat and head up lake.  Usually there were four to seven other families in their boats going with us.  We saw Rainbow Bridge, Hole in the Rock – where early Mormon Settlers lowered their wagons to cross the Colorado River, Cathedral in the Desert, Anasazi Indian Ruins, mountain goats, fox, deer, pink frogs – yes they were pink, lizards and lots of fish.  They were really great vacations.

This year I rented a houseboat at Lake Powell and invited my family (3 sons and spouses, 7 grandchildren plus one husband and a fiancé and 2 great grandchildren and my “ex” (and his wife) to join me for another vacation at Lake Powell.  Saturday, June 30 began the caravan to the Lake.  We arrived at Antelope Point Marina late in the afternoon and began unloading mountains of food and gear for 20 people into the houseboat and Sunday morning began the great adventure. 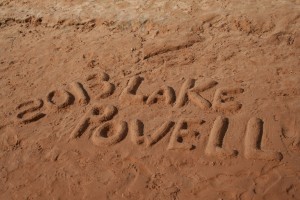 Darrell navigated the houseboat through the narrows, past Gunsight Butte, Cookie Jar Rock, Crossing of the Fathers, Camel Rock and up to Rock Creek Canyon where David and Susan had already established a camp for us.  Darrell, Kevin, Glenn and David secured the anchor lines for the houseboat and then it was time for a swim.

Mike and Shellee arrived Sunday evening, thank heavens for modern GPS so we were easy to find.  Bill, “my ex” and his wife, Helen arrived on Monday.

Matt and Jen arrived on Monday also. Matt has spent much time and $ restoring a 16’ open-bow boat, which he has named “That 70’s Boat”.  I welcomed him to the boating community where a boat is a “hole in the water you pour money in”.

We spent our time exploring the canyons and all the sights.  On Tuesday a visit to Rainbow Bridge, one of the Seven Natural Wonders of the World, was taken.  It is about a one-mile hike to the bridge from where you dock your boat.  It really is something to behold.

Back at camp there was a lot of water play including water skiing – Rachel; Darrell’s daughter skied for the first time. David’s personal watercraft was a favorite activity.  Even K.J. my three year old grandson experienced a “tube” ride. 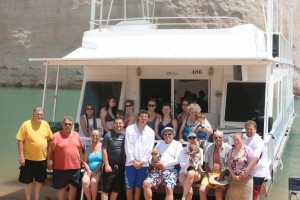 My all time favorite spot on Lake Powell is the Escalante River and we did spend one day exploring that area.  The water level is almost as low as our first visit so the Cathedral in the Desert and its waterfall was much the same.  Because of the low water we could not venture as far back into Davis Gulch to see the petroglyphs and LaGorce Arch.  It was sad to see that the Indian Ruins on the Escalante had experienced vandalism, the roofs had caved in and we were restricted from exploring them.

I had the movies from our old vacations put on CD’s and played them on the houseboat TV for everyone to see.  My grandchildren could hardly believe that Mike had single skied with his foot holding the handles of the ski and his hands on top of his head.  Needless to say Mike did not give us a demonstration this time.

I also took yarn and needles to make knitted scarfs. Shellee, Jen, Carie, Jil, Rachel, Jillianne, and Helen all tried.  Some even finished their scarfs.

I must admit a houseboat is very convenient in many ways; especially when several had a bout with a stomach flu problem.

We had a great time and it was sort of sad when the houseboat headed back for the marina.  Lake Powell is arguably the most scenic lake in America and  truly a beautiful place to vacation.

This entry was posted on Friday, September 20th, 2013 at 1:00 pm and is filed under Road 2 CA Blog, Road to California. You can follow any responses to this entry through the RSS 2.0 feed. You can leave a response, or trackback from your own site.