So You Want To Make A Winning Quilt? Road 2015 Outstanding Innovative Quilt

Kathie Beltz and Mara Novak were awarded $5,000 by sponsor SewBatik for their winning entry. 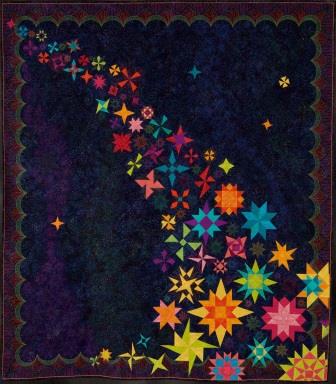 Skyfall was the second time maker Kathie Beltz and quilter Mara Novak have collaborated on a quilt project. They began the quilt in 2013 and finished it in 2014. Skyfall was born of the desire to marry Kathie’s love of innovative piecing with Mara’s interest in translating everything she sees into quilting designs. Both ladies are established quilters. Kathie got her start when she was invited to join a group of friends who were quilters and they started her with the basics. Mara began in quilting by taking a class with Deb Tucker. It was Kathie’s idea to create as many different stars as possible in one quilt. Kathie had recently become a Studio 180 Design Certified Instructor, and wanted to fully explore the Studio 180 tools. She was inspired to create as many different stars as possible in one quilt.  Kathie pieced fifty-eight unique stars and, instead of a basic block-by-block and row-by-row construction, she set them in a cascade across a deep blue sky.  The stars range in size from 2 inches to 10 inches and vary in brightness, to add to the perspective and depth of the quilt.  Kathie also added three Lemoyne stars in a blue fabric different from the background, which represented stars so far away and faded, they can barely be seen.  The cascade of stars left plenty of room for Mara to add secondary star falls, as well as an elaborate border, made entirely of thread. From design, to shopping for fabric, then to construction and quilting, it took about 9 months for Kathie to make the quilt. This project taught Kathie that she needed to schedule more time for quilt making, because she was always up against a deadline. Mara’s quilting took even longer as she had to learn that it takes very bright thread to show up on dark fabric. When they found out they had won, Mara did a “happy dance” and Kathie was “incredibly excited.” Kathie still isn’t sure what she is going to do with the prize money. Mara has bought a treadmill. Mara and Kathie intend to continue collaborating in the future, as they “keep looking for the perfect balance of piecing and quilting” that will “push our abilities and stretch our imaginations.”]]>

This entry was posted on Thursday, September 10th, 2015 at 10:07 pm and is filed under quilt entries. You can follow any responses to this entry through the RSS 2.0 feed. You can leave a response, or trackback from your own site.