Missouri Star Quilt Company’s own Jenny Doan presenting her Trunk Show at the Doubletree Hotel on Saturday night. Over 1,000 guests came to learn and be inspired by Jenny and her marvelous quilts. 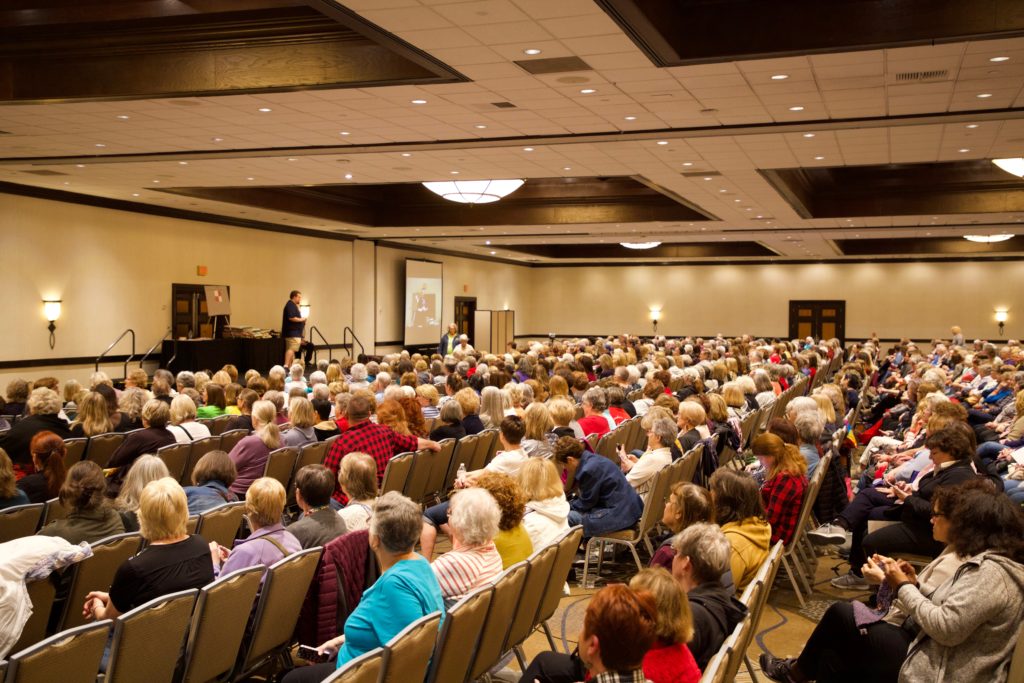 While Jenny has given her Trunk Show many, many times, each presentation is unique. Before going on stage, Jenny ponders on what message of hope, creativity and support she wants to leave with the audience. 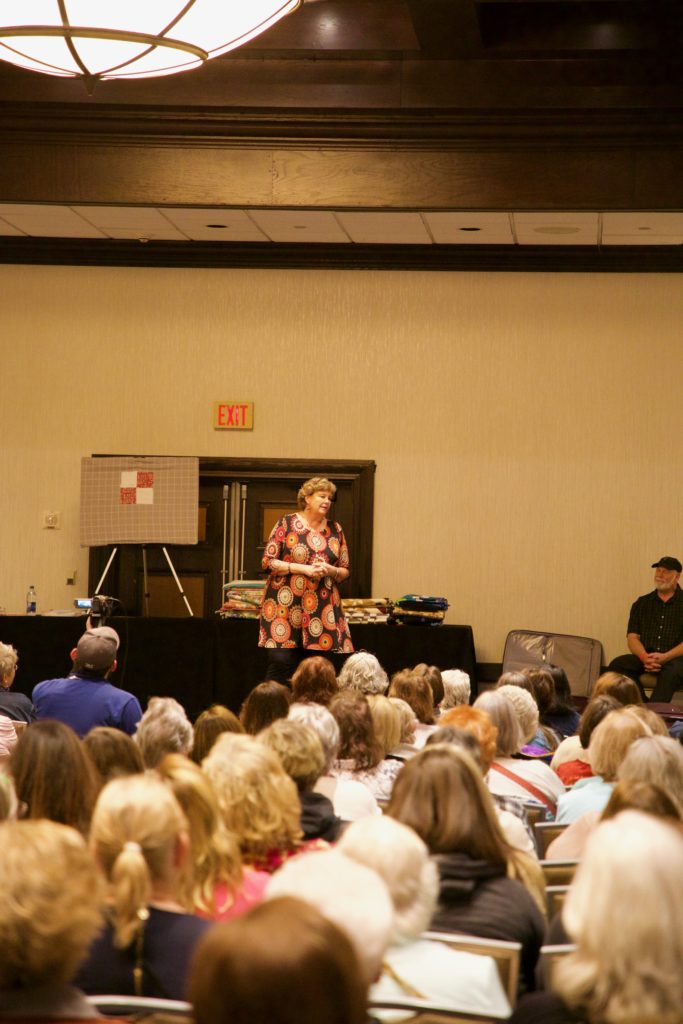 Jenny shared that she learned to sew as a young girl in 4-H. She appreciated the women who were patient and kind and taught her a skill that her own mother couldn’t. Years later, their example instilled in Jenny one of her core values:

“Share the knowledge you have with someone or else it will die with you.”

Missouri Star Quilt Company began 10 years ago with Jenny doing long arm quilting for clients. The machine was too big for her house, so she bought a building to house the business. She had a dozen quilt patterns in her repertoire and thought that was enough to keep her busy and fund her retirement. But her son had more in store for her: YouTube videos. 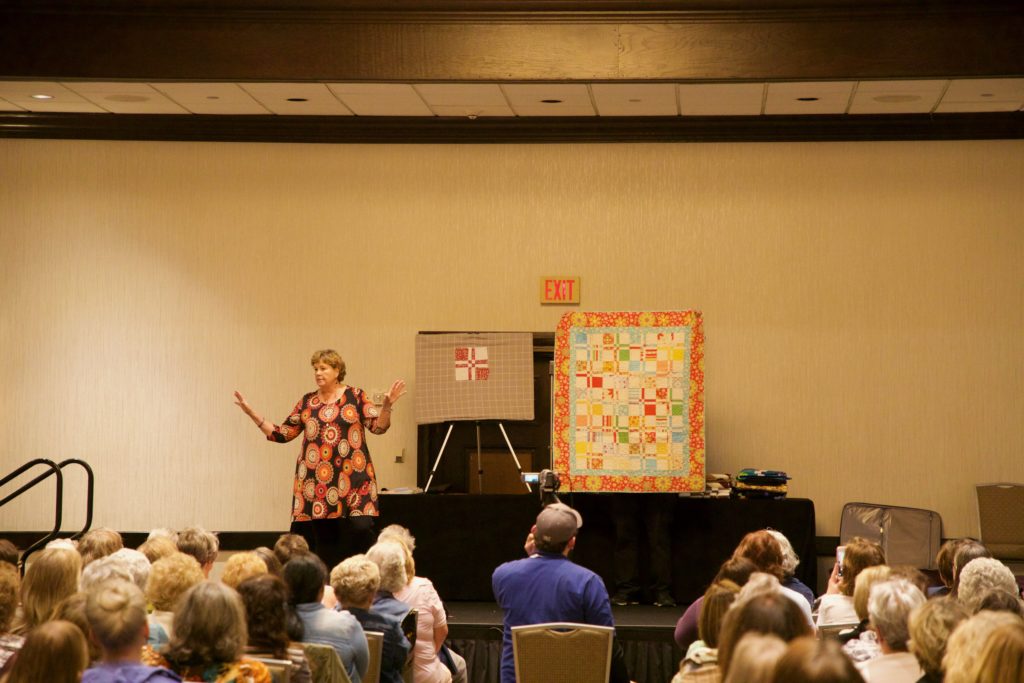 Jenny’s YouTube quilting tutorial videos began when YouTube was in its infancy. She broke her leg just prior to her first episode so in the first few tutorials, Jenny was filmed in a wheelchair, heavily medicated. “It was just terrible,” she recalled. Today, she has done over 500 tutorials, with a new one coming out every Friday. 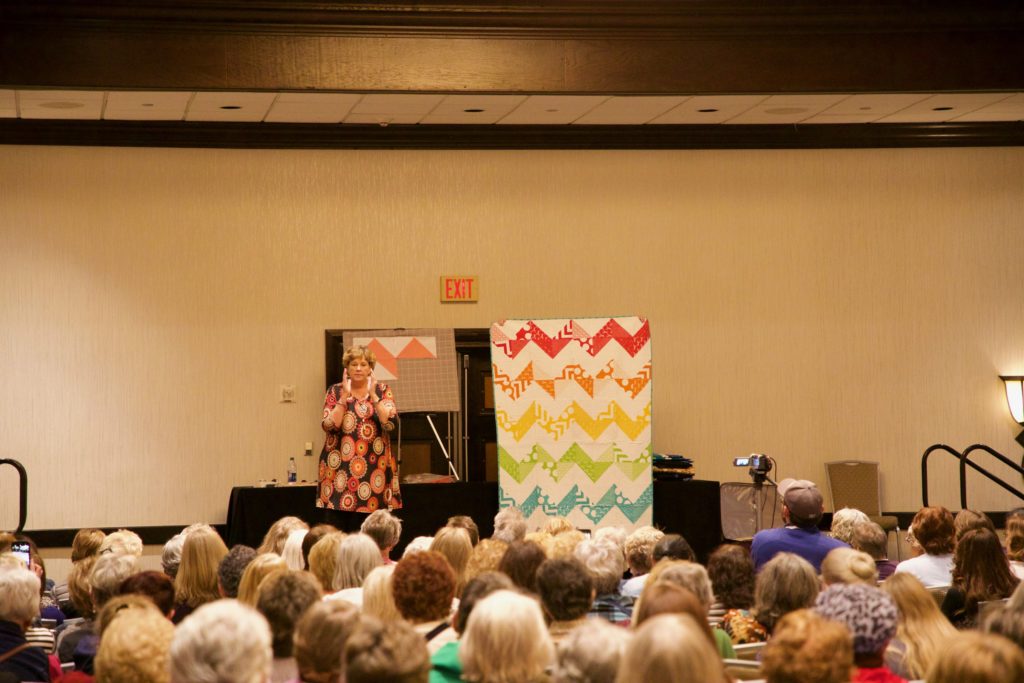 After one early episode, a woman called and inquired about the fabric used in the video and asked where she could get it. Jenny couldn’t help her because it was some random fabric she had in her stash. But that phone call gave Jenny the idea that maybe Missouri Star should start selling fabric lines. At first, they would purchase 60-100 lines of fabric every 4 months. Each line had 20-30 bolts and it was becoming cost and space prohibitive to continue. Then Moda came out with pre-cuts and Jenny discovered a more economical way to store and use fabric. Jenny shared that 99% of her work today is done from pre-cuts. “They have taught me so much.” Why are pre-cuts so popular with Jenny? First of all, they are precut– saving time and effort. Second, she is not a color matcher. She prefers to trust talented and gifted fabric designers to do the fabric matching. And third, using pre-cuts takes away the “overwhelm factor” because you know exactly how much yardage is in a charm pack, a jelly roll or a layer cake. 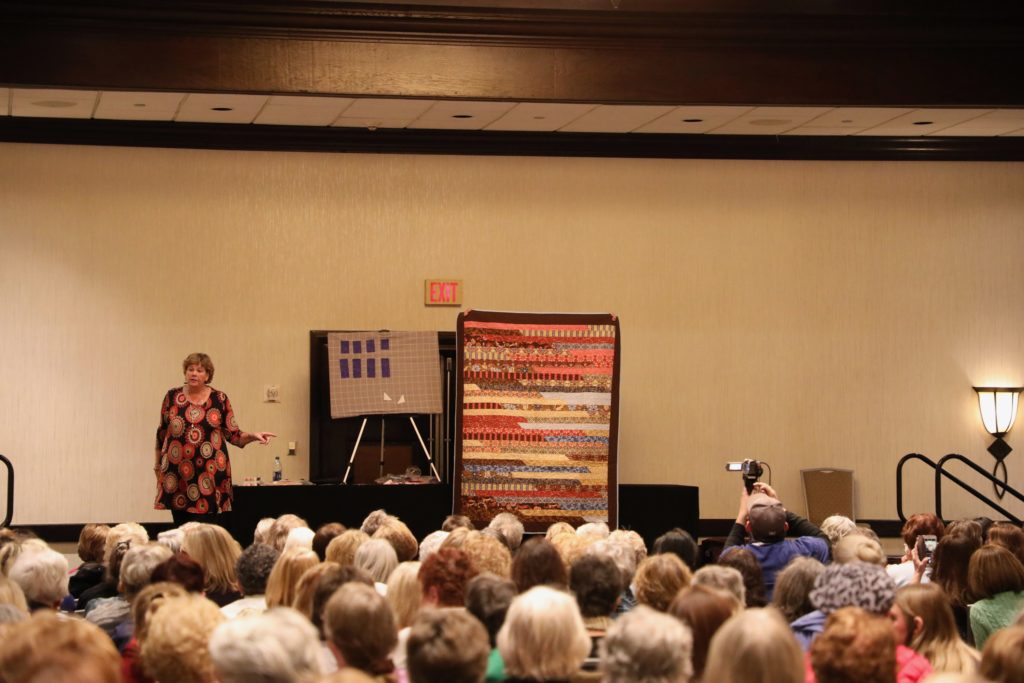 Adding to the fun of the Trunk Show was having Jenny’s husband, Ron, on stage with her, helping to show the quilts and tell their stories. Ron is a quilter too. He enjoys the technical and detailed aspect of quilting.  “We quilt differently,” said Jenny, “But we do it together.” 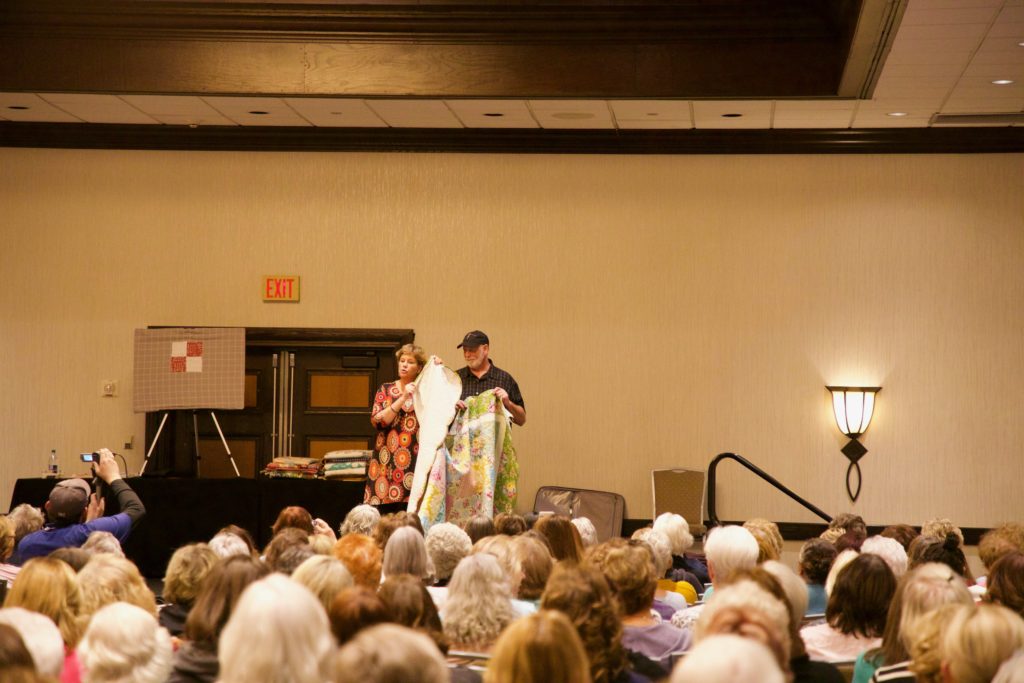 Jenny referred to herself as a utilitarian quilter; she wants her quilts to be used and worn out. To Jenny, a quilt represents love, hope, warmth, ownership and kindness. “No other hobby can offer all this.” At the end of the Trunk Show, Jenny left her audience with this message of encouragement: “The stitches you take by yourself in your sewing room is changing the world. Never before have we needed your gift than we need it now.” 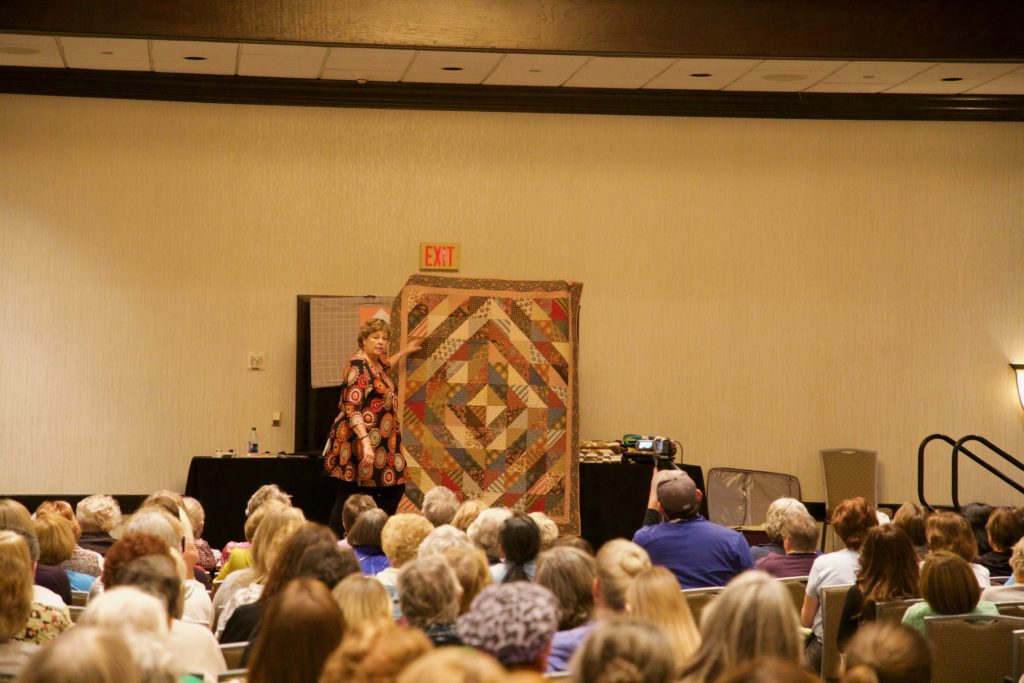 Thank you, Jenny Doan, for sharing your quilting journey with your Trunk Show at Road 2018.]]>

Pineapple Fabrics is an e-commerce company that offers pre-packaged, pre-cut fabrics that can be used in over 60 different projects designed by the company.

Rick Kimelman and his wife, Dot, are the driving force behind Pineapple Fabrics. It was Rick’s grandfather who, over 80 years ago, started the fabric swatching business, Swatchcraft. Over the years Swatchcraft has evolved into a full-service business offering graphics, imaging, printing, fabric sampling and shipping needs for their clients, other business owners. Realizing that there are “only so many companies to swatch with,” Rick wanted to reinvent the company with a focus on “making sewing fun.” [caption id="attachment_4966" align="aligncenter" width="625"] 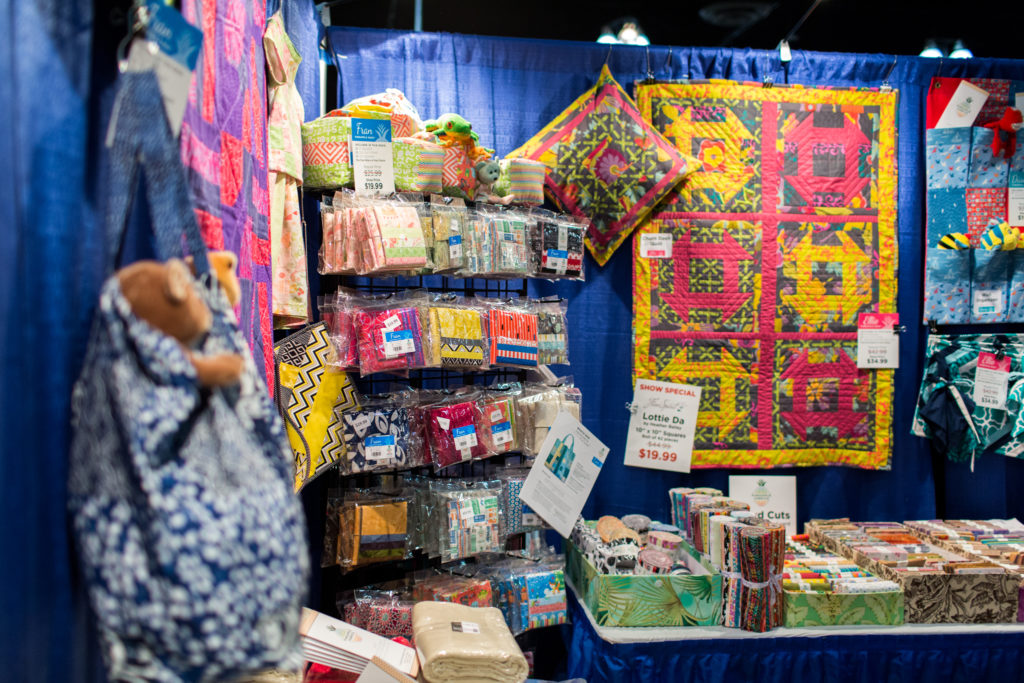 Photo by Brian Roberts Photography[/caption] Their first attempt at retail marketing was in 2012, putting together and selling pre-cut fabrics – jelly rolls, fat quarters, and layer cakes — from designers like Windham Fabrics, Andover, RJR Fabrics, Dear Stella, Michael Miller and others. Their first show was in March, 2015 at the International Quilt Festival in Rosemont, Chicago. The feedback they got from customers was that they loved the idea of having packaged pre-cuts but they kept on asking, “What do you do with them?” So, after that show, the company began work on 3-4 pattern designs to complement the pre-cuts. [caption id="attachment_4962" align="aligncenter" width="625"] 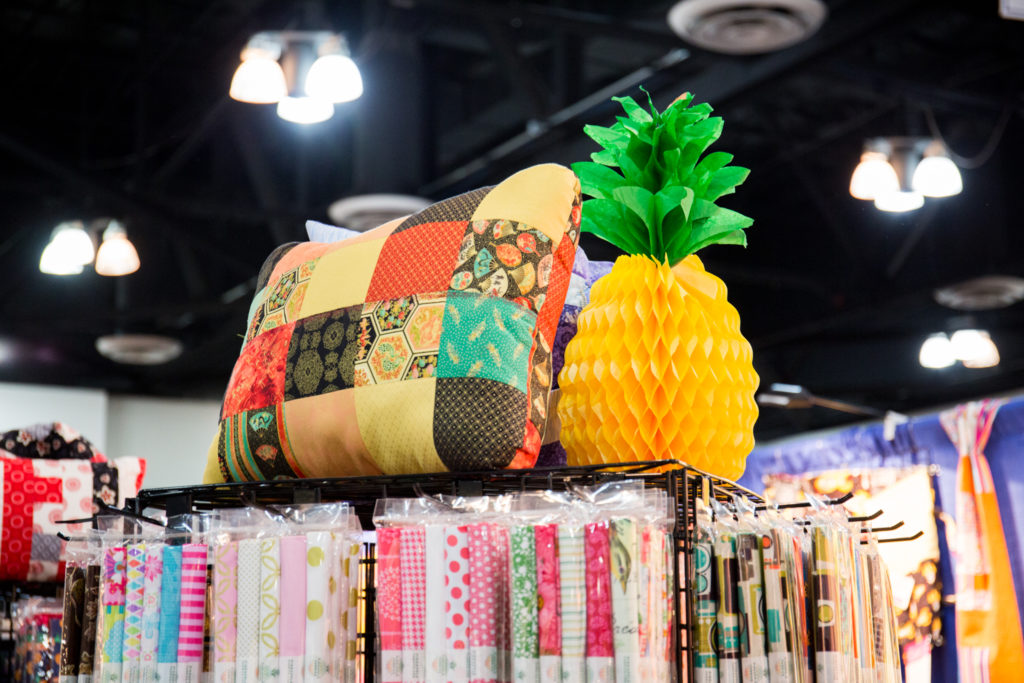 Photo by Brian Roberts Photography[/caption] In 2016, Pineapple Fabrics began organizing their fabric packs by girl’s names in an alpha order. First was Alice, then Bella, Carla, Diana, Ellie and their latest, Fran. Each Pineapple Pack has different sized fabric cuts in different amounts unique to that particular name. When a customer buys a pack, they then choose one of 10 patterns designed to use with it. [caption id="attachment_4964" align="aligncenter" width="625"] 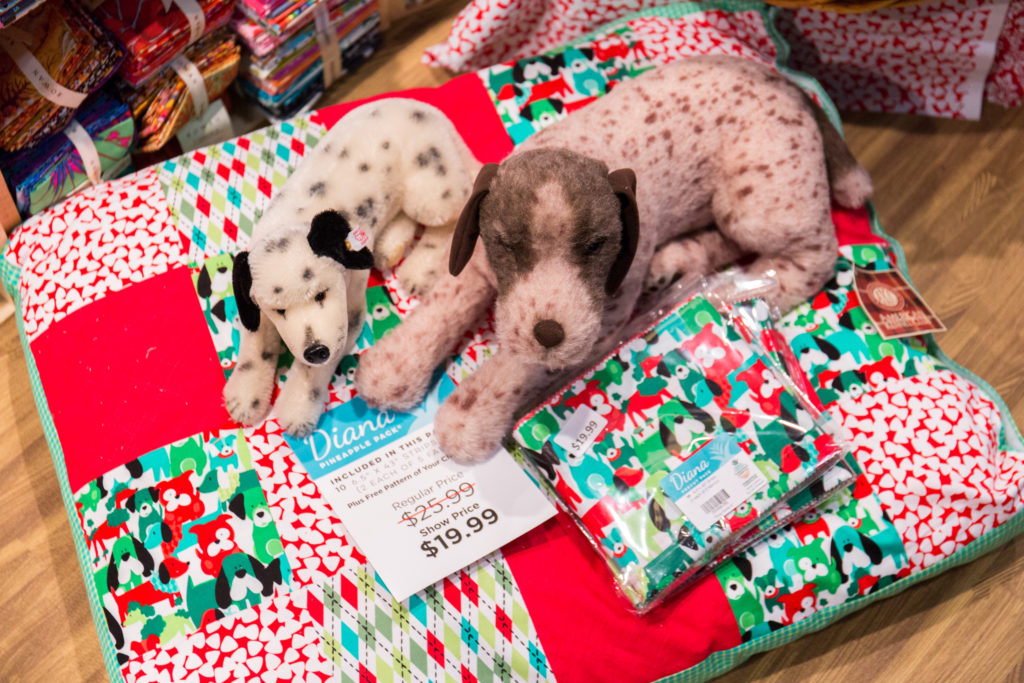 Photo by Brian Roberts Photography[/caption] Says Dot, “We do all the work of cutting and coordinating fabrics so all the customer has to do is sew. The Pineapple Packs are packaged so that if you can’t get to it right away, the pieces won’t be scattered.” In addition to the Pineapple Packs, Pineapple Quilts also offers Quilt Backs (precut backings that match quilt top fabrics) and their trademark, Bonus Quarter—21” X 21” squares that are found in every pack. In the future, they hope to offer swatching for their projects—bringing it back full circle to where the business originally started. Making sure their customers have a “happy, positive experience” is Pineapple Fabrics’ goal. That is why this internet based company comes out to trade shows like Road to California so that they can hear firsthand what customers are looking for and then implement their feedback, offering a wide range of colors and patterns. Road 2017 was Pineapple Fabrics second time at Road to California. They commented on how nice the show is and how everyone they meet are nice as well. [caption id="attachment_4963" align="aligncenter" width="625"] 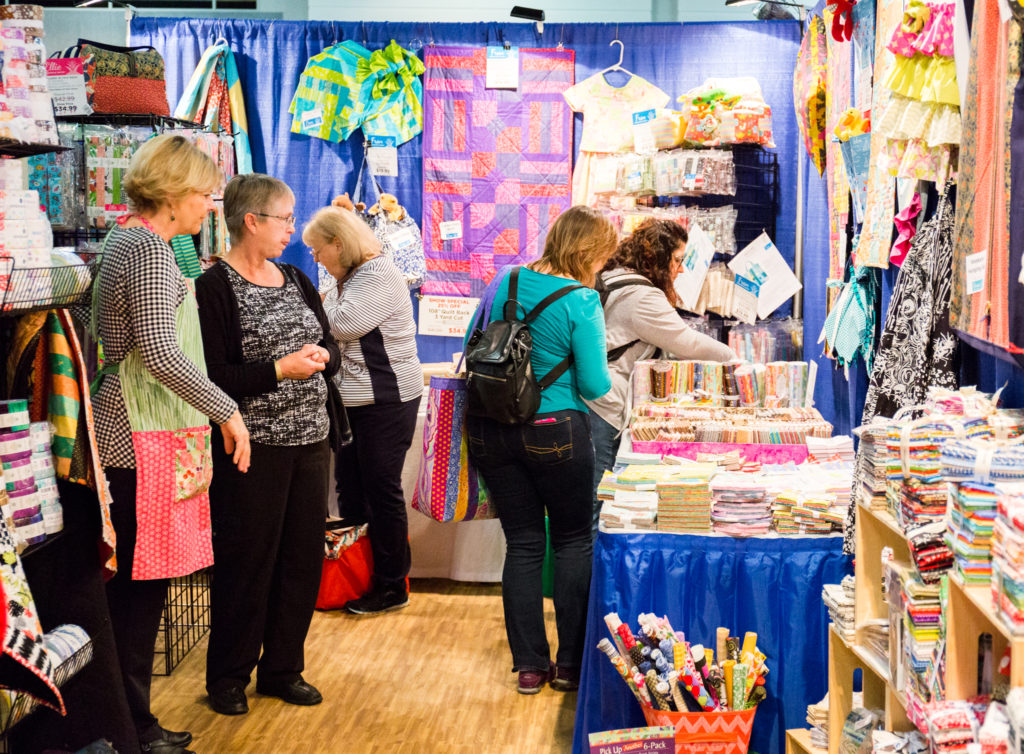 Photo by Brian Roberts Photography[/caption] Another way Pineapple Fabrics connects with its customer base is offering an “outlet sale” every two months at their warehouse in North Carolina. The sales last three days and are “a lot of fun,” with special pricing, demos, and food trucks. To learn more about Pineapple Fabrics and to order their Pineapple Packs and other products, please visit their website.  ]]>