Quilts Anyone Can Make, the booth will include patterns designed by  Kenna Ogg, of Madison Cottage Design.

Kenna lives in Boise, Idaho. In addition to being a quilt pattern maker, she also has a background in photography, weaving and knitting. How did she pick quilt making from all the arts she is involved in?  Kenna told Beyond the Reef, “Quilting picked me.  One day, while unemployed, I was out shopping in a quilt store (A Quilter’s Dream) and foolishly said, “I can help” and, well, need I say more.”

Her design room at home consists of an old JC Penney table (her dad was a retired Penney man, had the table for years and now it belongs to Kenna), a Pfaff tiptronic 2040 sewing machine that she has had for years, and a bulletin board shaped like a nine-patch. Kenna loves listening to music while she works. She has a 50-disc CD player that she plays everything from Bruce Springsteen to Dean Martin, Tracy Chapman, David Cook, Barbara Cook, Patti Lupone, Patti Scialfa, and George Strait. Madison Cottage Design was started 6 years ago. It is a wholesale only business. Most of Kenna’s quilts and patterns have been at various quilt markets, either in her own booth or other fabric vendors.

The booth at Road to California will be located next to the Road to California booth in the main ballroom. Matt Reese and Stevi Graves came up with the idea to showcase a pattern designer like Kenna. The booth will give a more complete sense of quilt work rather than just bits and pieces. Most of the patterns will be easy to make from mostly fat quarters. Says Kenna, “Some may look more complicated than others but they are all very simple to do.”      ]]>

That’s the motto that drives and inspires Dora Cary, owner and creator of Orange Dot Quilts.

Dora was born in Romania and studied to become first, an engineer and then a graphic designer. She moved to the United States in 2001 and discovered quilts and quilting in 2006. In 2008, Dora became an American citizen and finished her first quilt. She wrote her first pattern and opened her Orange Dot Quilts Etsy shop in 2013. Three years later, she decided to make quilting her life and her living. Today, Dora lives on the Central Coast of California, in Paso Robles, with her husband and daughter, two dogs, three cats, and four sewing machines. Aside from quilting, Dora loves to travel, dance, read, and learn new languages. Since quilting has become a full-time business, Dora has taken up guitar as her new hobby.

Dora created a No Baste method for quilting fearlessly and free on a domestic sewing machine.   She started writing quilt patterns because she wanted to bring her own creative ideas to life. Being both an engineer and a designer prepared Dora well for both aspects of pattern design: the technical part and the art part. In her first year as a pattern designer, she created eight new patterns and placed them in her Etsy shop but Dora says her “real start in business happened when I participated in the 2016 Spring Quilt Market as a helper. Preparing for my presence at Market, I designed a beautiful brochure featuring my first eight patterns and, fearlessly, I approached all the distributors with the brochure in hand. Now my patterns are carried by all the main distributors in United States and one distributor in Canada. In addition, I decided to also represent my patterns at other quilt shows and festivals and also teach my quilting techniques and lecture.”

What does Dora like most about running her own business? “I like being my own boss, traveling, and meeting new people but what I LOVE the most about this business is creating new designs. I have several notebooks chock full of different quilt designs and new bag and garment concepts. I just need more time to bring them all to life.”

What can guests expect to find in the Orange Dot Quilts booth? Dora says that the booth will feature her patterns for quilts, bags and easy sewing garments. There will also be quilt and bag kits; quilting fabric precuts; medium weight cotton-linen blend Japanese fabric cuts in fun designs; her favorite fabric notions such as the African porcupine quills and The Strip Stick; Auriful thread in all shades of orange; hand knitted lace shawls; books; pincushion patterns, and more.

Road to California 2018 will be Dora’s first time at the show. She is looking forward to reaching a new audience, being inspired and also inspiring others. She said she has heard that “Road to California is a unique experience and I am looking forward to being a part of it.” To learn more about Dora and Orange Dot Quilts, visit her Etsy Shop.    ]]>

Laura Heine and Fiberworks  has been a popular Road to California teacher and vendor since 2014. 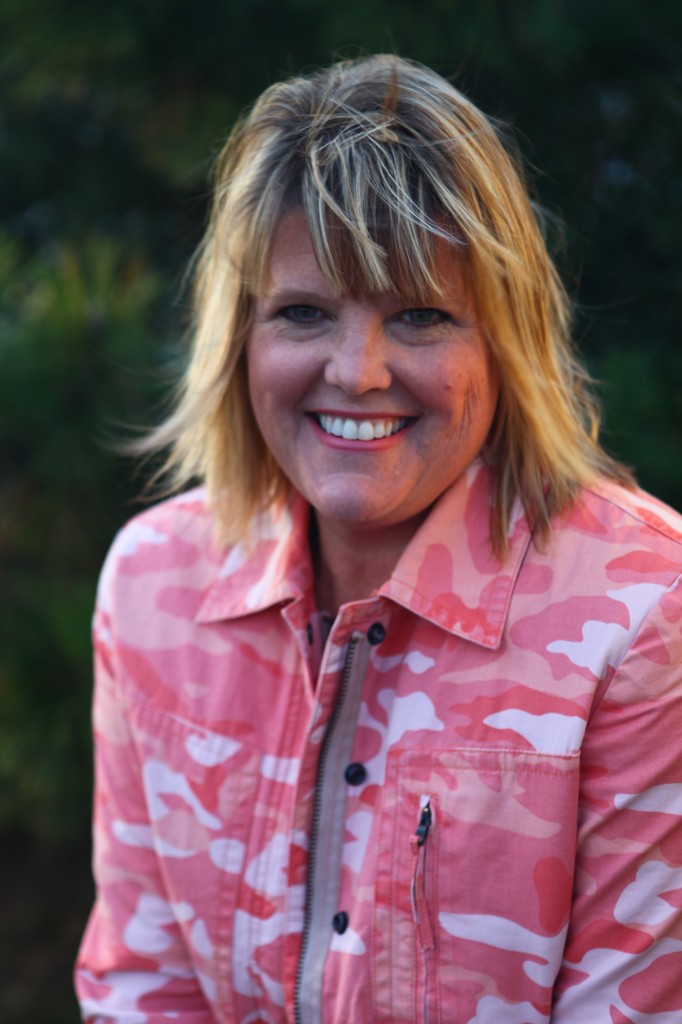 A native of Montana, this registered nurse gave up a full time nursing position to open her quilt shop in Billings in 1994 and has “never regretted it.”   Laura is the mother of two grown children – daughter Jenna and son Brandon.  Her best friend is her Labrador, Hannah, who comes to work with her every day. When she isn’t quilting, Laura enjoys glamping— glamorous/luxury camping. She owns a pink 1956 Shasta trailer that she restored. She takes it on all travels that she drives to including every time she teaches at Road to California. Look for her pink trailer in the parking lot of the Ontario Convention Center!!

Laura started quilting over 30 years ago when she was expecting her first child. She took a quilting class so that she could be able to say “I made one quilt in my life.” Laura figured after the baby came, her chances to quilt again would be lost. Not true!! Since then, Laura has made countless quilts and has gone on to be a fabric designer, teacher, author and thread designer. Laura will be teaching two classes during Road to California 2018. On Monday, 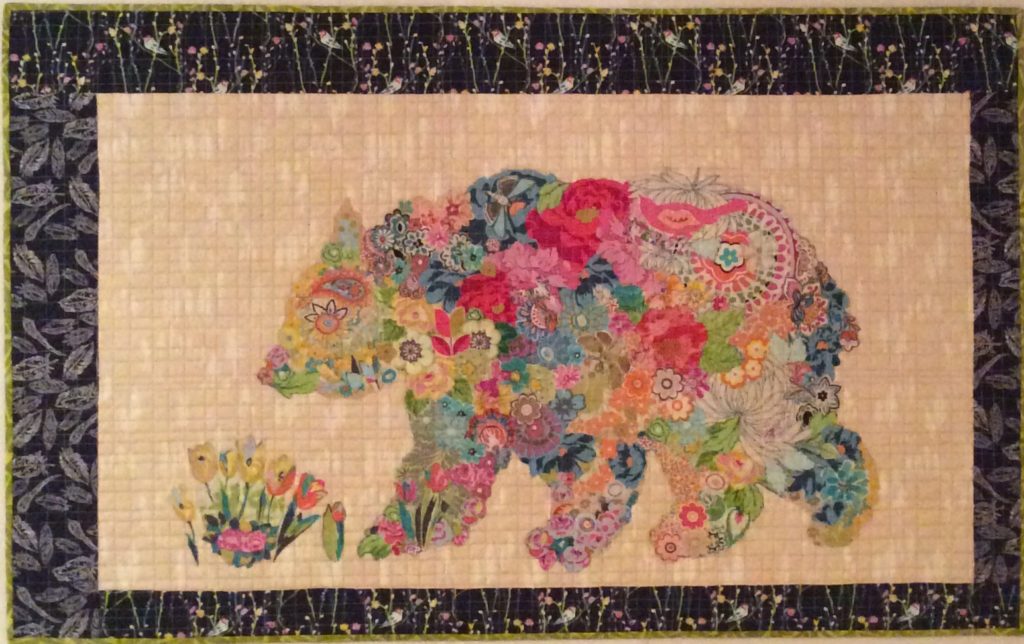 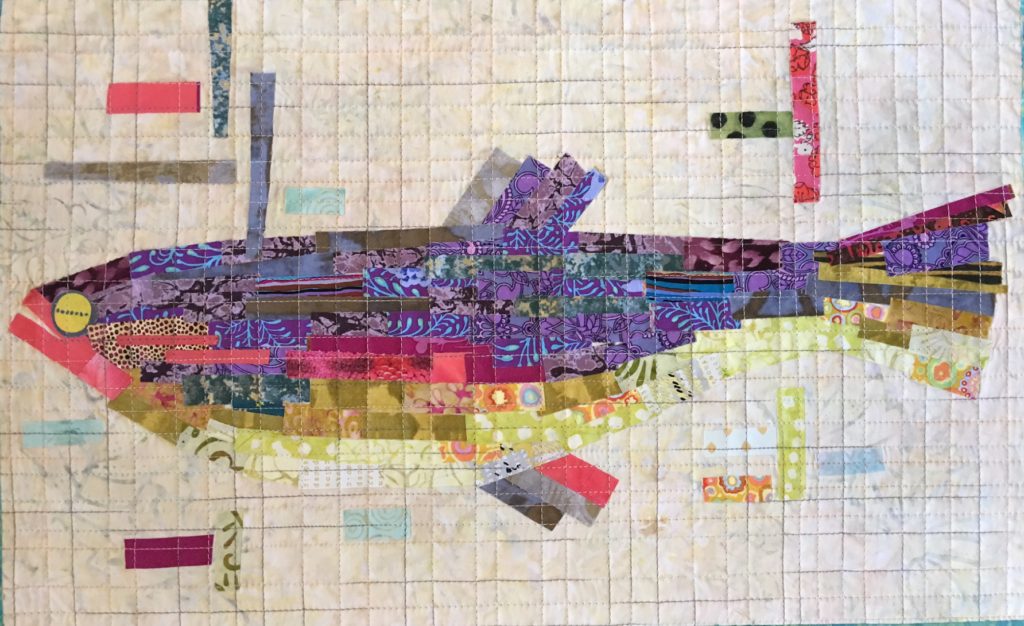 Both classes are perfect for beginners wanting to learn her collage technique.

What is Laura’s best advice for quilters?  “Do what you like, like what you do.  You don’t always have to follow the rules.” Laura’s business in Montana, Fiberworks, is a 6,000 square foot shop where “talent, imagination and fun meets fabric, patterns, quilts, threads, and classes.” It supports a community of fiber artists that includes those just starting out, those whose work proudly adorns Fiberworks’ walls, and a delightful rainbow of colors in between. It’s a “quilter’s heaven” where “friends and quilters are invited to just bring your imagination.” 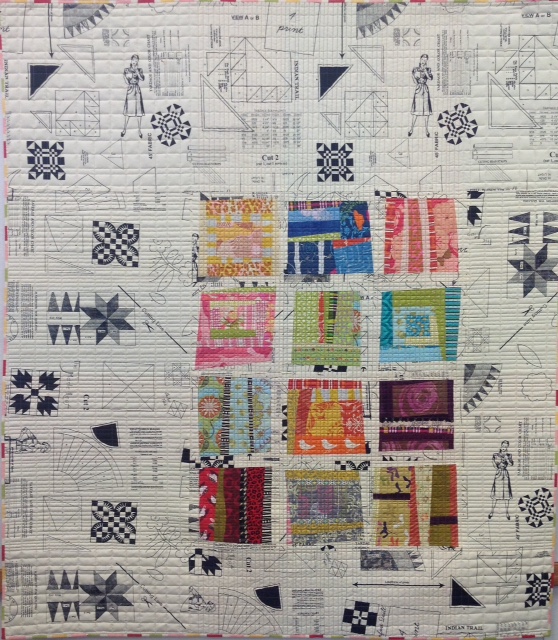 Looking for quilt items that have a modern flair at Road 2018? Then stop by Laura’s Fiberworks booth.  She will have a large selection of patterns that she has designed and can only be found in her shop or on her website. Laura loves it when customers “get lost” in her booth! 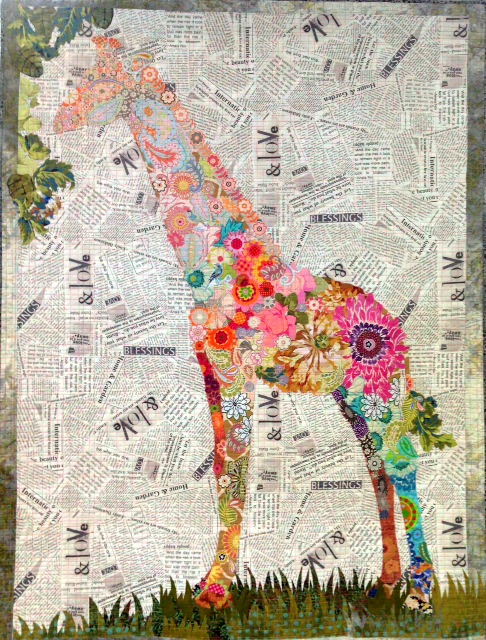 What does Laura like most about coming to Road to California each year? “Meeting old friends and a whole new group of people!  I look forward to the happy faces and the camaraderie that comes with quilting.”  To learn more about Laura, visit her website.      ]]>