Generations Of Quilters And Quilters To Be 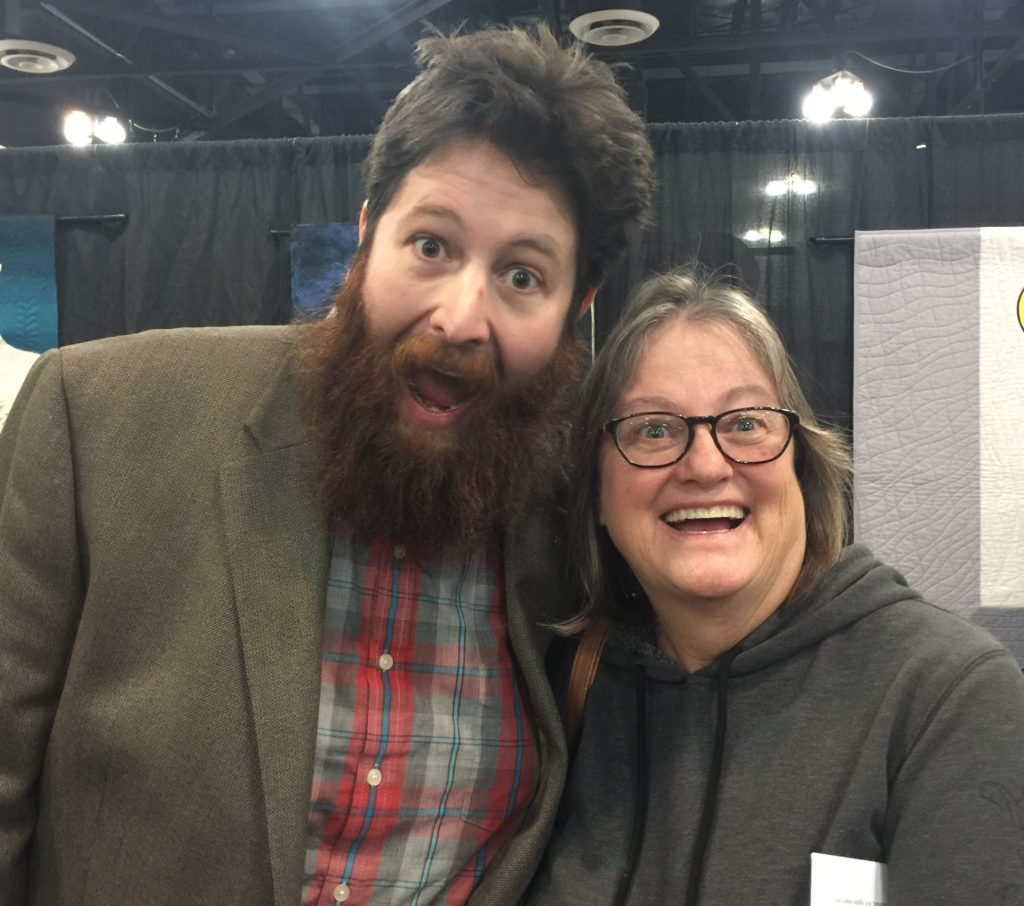 Ben grew up watching his mom, Mary, make quilt for his bed and wall. He wanted to join his mom at Road 2017 to see what others were doing in the “quilting universe.” As Mary related, it is so “different” to see all the art quilts “in real life” than in a picture. A quilter for over 30 years, Mary had been to Road six previous times, always to be inspired. Ben was “blown away at the detail work and creativity” he found during his first visit to the show. 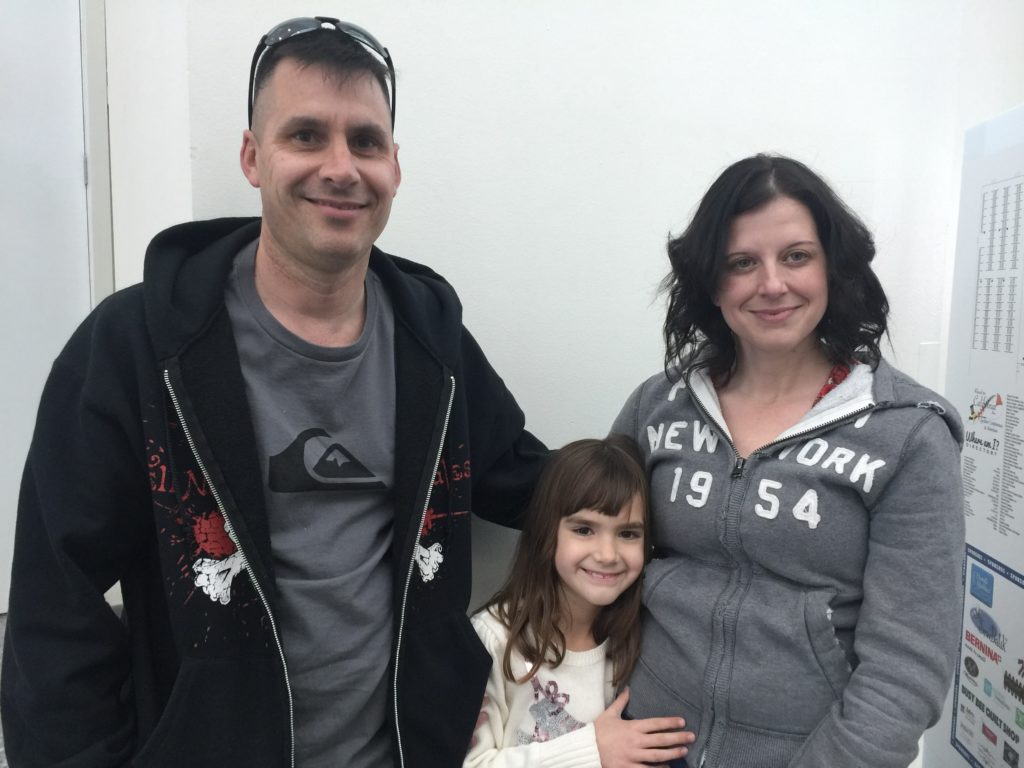 Kevin, Brenda, and Ashley (age 7) are from Simi Valley, California. Ashley had just received her first sewing machine the Christmas before Road 2017, a Bernina 330. She got interested in sewing from watching her mom sew. Ashley’s first project was going to be a quilt, of course, picking out the fabric and pattern with her mom. It was Ashley and Kevin’s first time to the show. Kevin found there were “lots of options for my girls.” Brenda has been quilting for two years and is self-taught. She had bought an embroidery machine because she wanted to make pillowcases. She quickly learned that in order to make the pillowcases, she had to sew in a straight line. Quilting has helped her to sew straight lines!!  Brenda’s first project was a king size quilt made of six-inch squares. 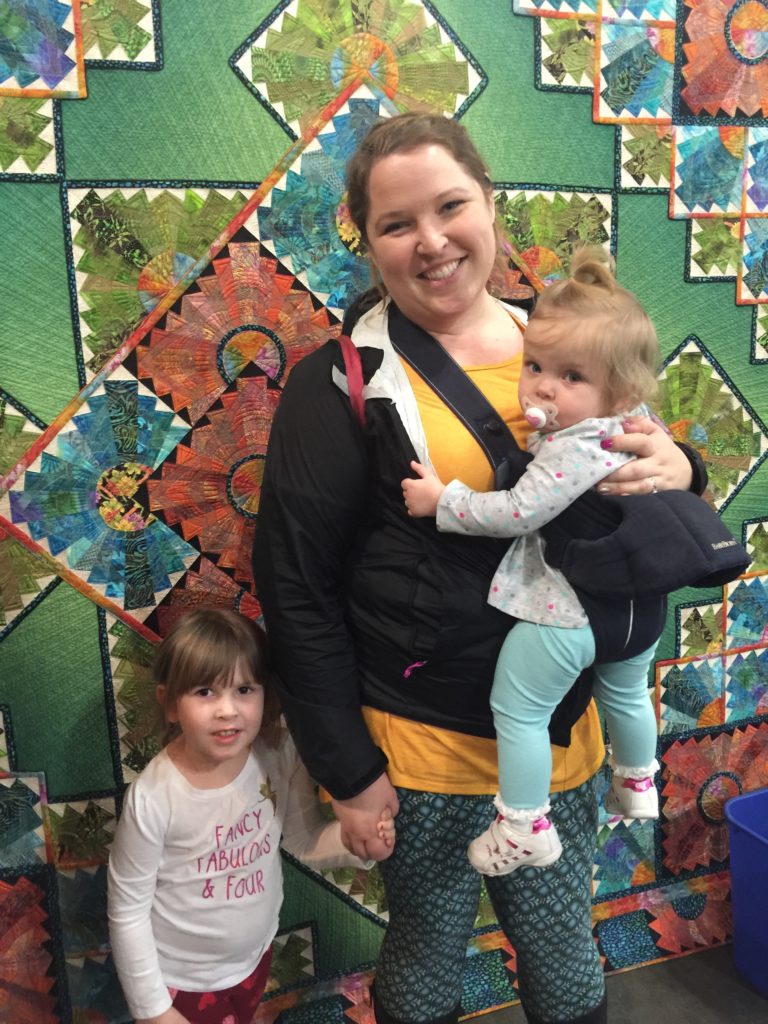 Jenna came to Road 2017 to model for her girls, Emma and Abby, how to “have fun and explore” new ideas to “make stuff.” The all loved looking at the quilts, fabrics, and different projects. Jenna has been sewing for five years. Her first quilt attempt was a baby blanket for Emma when she was born. 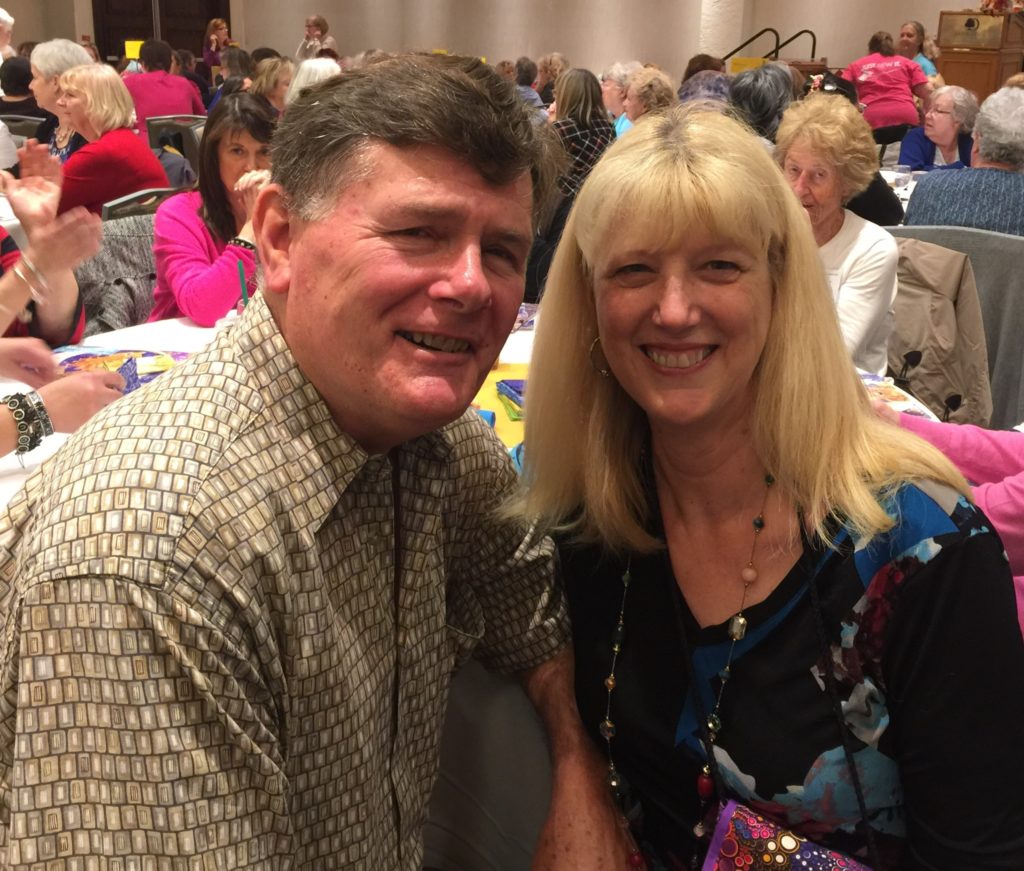 Married 41 years, Barry and Brenda McCutcheon have attended Road to California 10 times together and Party Time eight of those ten years. They come down from Northern California for “lots of beautiful quilts, cool ideas, and lots of fun.” Will your family be joining you for lots of inspiration, creativity, and fun at Road 2018?    ]]>

Families That Quilt Together Stay Together

Road to California is a great place for family members of all ages to enjoy.

Judy Brink, her daughter Lori Vandenberg, and granddaughter Allison Vandenberg are all Road to California veterans. Judy has come to Road the past 19 years and Lori for the past 15 years. Allison’s first visit to Road was when she was just 6 weeks old. She’s been back two other times. Judy has been sewing since she was 6 years old and has influenced both Lori and Allison with their sewing. When Lori was expecting her first baby, she wanted to make a baby quilt and Judy helped show her how.  Allison got her first sewing machine last Christmas. Grandma Judy shared with Allison some of her stash to get her started on her first sewing projects, pillowcases. Judy, Lori and Allison regularly plan their own quilt retreats twice a year. They go to Palm Springs, California where they quilt, swim and share. Lori commented that “Road is an event we never miss.” Added Allison, “Road is really fun and I get to get a half day off school to come!” 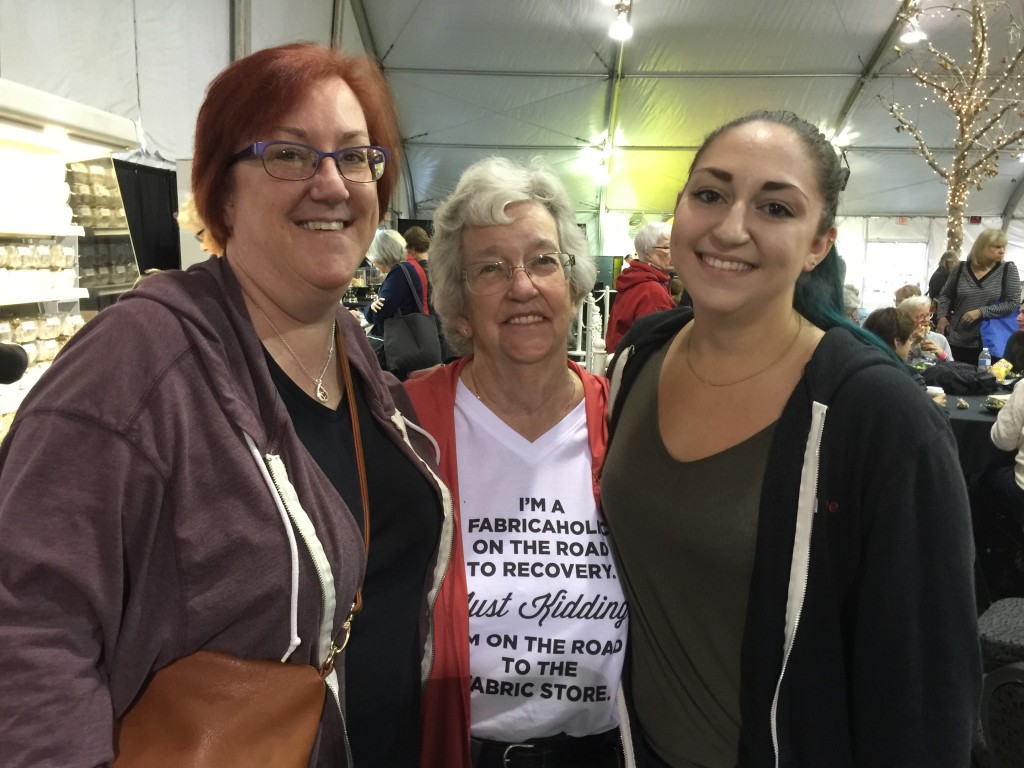 Kim, age 19 from Simi Valley, California, attended Road 2016 with her mom and grandmother, a third generation quilter. Kim got into quilting when she decided she wanted to make a quilt for her best friend. Since then, she has also made a couple of wall hangings. She finds quilting to be a nice break from school and work. Road 2016 was her third time at the show. “I love it.” Kim likes seeing all the quilt entries. “They are mind blowing.” 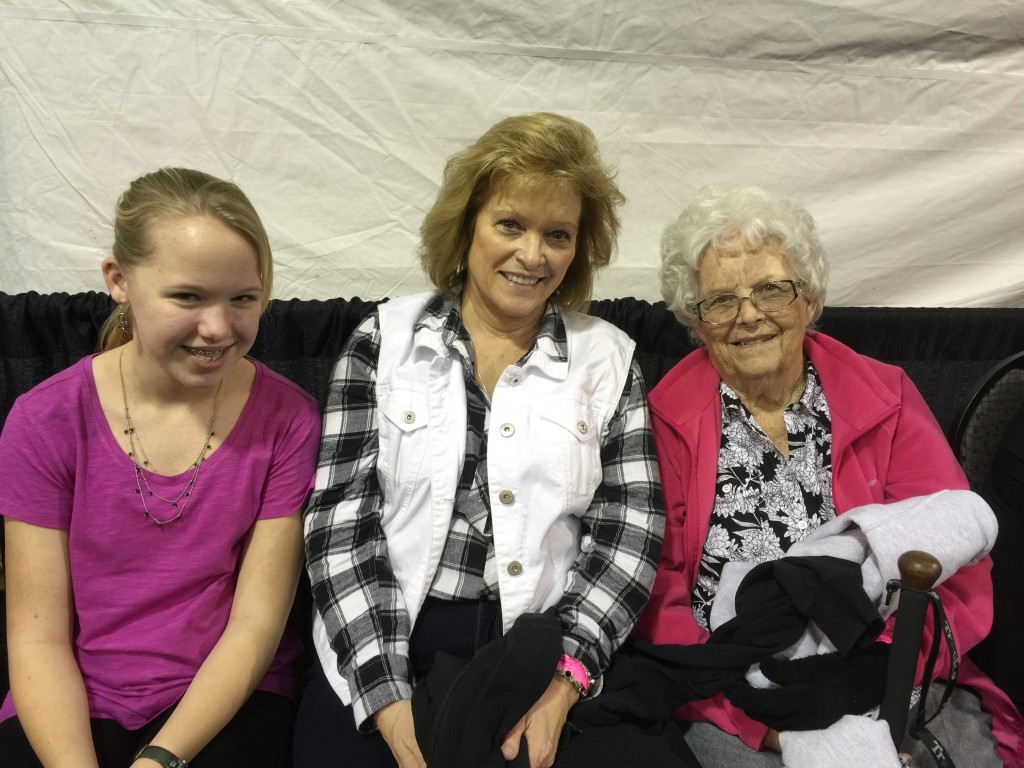 These three generations of quilters visited Road from Bakersfield, California. Grandmother Kay, Kay’s daughter Judy along with Kay’s granddaughter  and Judy’s niece Alyssa, age 13, enjoyed spending the day together, enjoying the variety of quilts and skill levels on display. Kay has been quilting for 30 years and is 90 years old. Judy started sewing in the 8th grade and has been quilting for the past 25 years. Her first quilt was made from fabric she bought at J.C. Penney. She cut out hexagons, created her own pattern and sewed it together. Today, she prefers to applique. Alyssa started quilting 5 years ago. She likes to piece together fabric to make pillows.  While her aunt and grandmother have been to Road dozens of times, Road 2016 was Alyssa’s first visit. “I liked it,” remarked Alyssa. She especially enjoyed the Carol’s Zoo Booth. Who in your family do you bring along to Road?        ]]>

This Family Can Quilt!!

Some families go to the movies. Other families go camping. The Dommer family goes quilting. 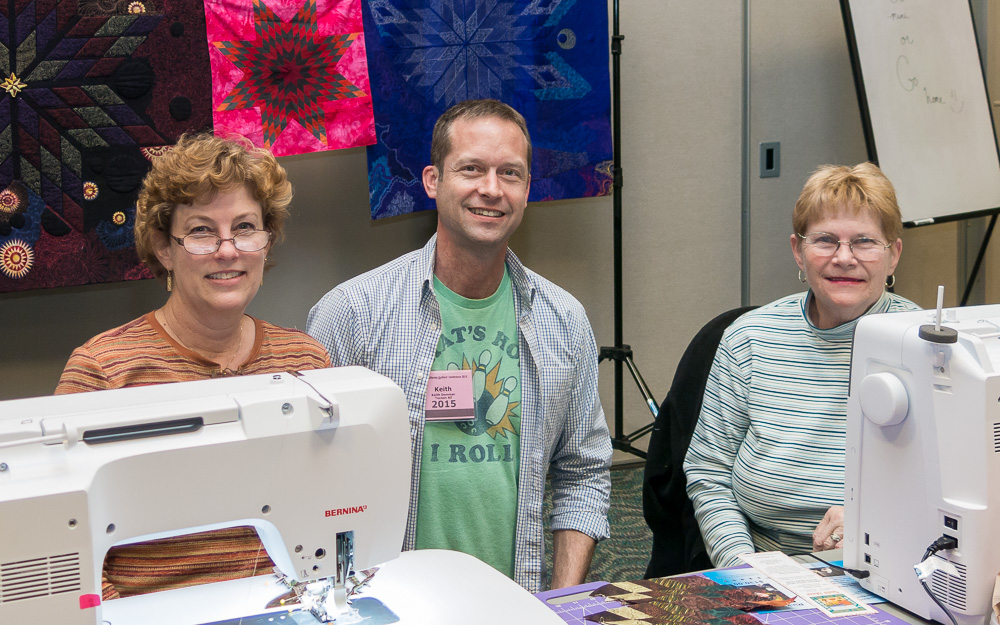 For over 20 years, they have planned get-togethers around their love of quilting. With Darlene’s birthday falling near the week of Road to California, it has been a tradition for the Dommers to help their mom celebrate by going to Road together and taking a class or two. It’s a natural way for the three family members to spend time together and encourage each other with their quilting.

How did they get started in quilting? Darlene sewed clothes until about 40 years ago, a friend invited her to attend a city sponsored quilt class. Terri also started out sewing clothes. She says she didn’t own a pair of store-bought jeans until she got a job out of high school!! Terri thought quilting would be a fun way to use her sewing skills. Keith grew up watching his mom and grandmothers quilt and thought they made “ugly things.” In 1990, he went to Visions, an art quilt show in San Diego and it just drew him in. His quilting is a great complement to his day job as a CPA.

Each of the Dommer family has their own quilting style. Darlene prefers traditional quilting and has done some appliqueing. While Terri loves applique, she doesn’t have any desire to do it. She prefers a more traditional style and gives away most of the quilts she makes. Keith started out making pieced quilts. After 10 years of quilting, he started doing machine applique. His quilt tops integrate bold, graphic designs. Keith has won numerous awards for his quilting including this second place award for Traditional, Large, Mixed at Road to California in 2012.

What do they enjoy most about their annual Road family outing? For Darlene, she loves the inspiration she receives for trying new techniques. Keith is always astounded by the beautiful quilts and feels that “Road showcases the cutting edge of where quilting is currently heading.” Above all, Terri thinks Road is the best place for a family outing. And we would have to agree!!

How many quilters are there in your family?